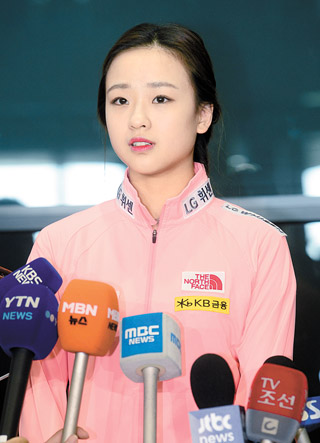 Rhythmic gymnast Son Yeon-jae says she feels “in control this season” after arriving at Incheon airport on Tuesday. She will be taking part in the national team trials on Saturday. [NEWSIS]

South Korean rhythmic gymnast Son Yeon-jae has no doubts she can take on any world-class competitor.

Her confidence was evident when she arrived in the Incheon airport on Tuesday from Moscow to take part in the upcoming national team qualifiers this Saturday. “I feel like I am in control this season,” said Son. “I have raised the quality of my performance enough to record-setting level and I am thrilled about that.”

Her feelings aren’t unwarranted as Son has been carding medals in every major event she has taken part in so far this season. Son collected two silvers in ribbon and clubs last weekend at the International Federation of Gymnastics (FIG) World Cup in Pesaro, Italy.

She’s also earned medals in other international competitions sanctioned by the FIG including one gold and a silver at Espoo, Finland, and two silvers and one bronze at Lisbon, Portugal. She’s also earned four medals, including a silver in individual all-around event, during the Moscow Grand Prix in February.

What’s more noteworthy is that she has been breaking her own records, an indication of the steady increase in her performance and ability to handle herself. Initially, she tallied her career best at 73.550 points during the Espoo World Cup, only to surpass that in the next event in Pesaro after collecting a 73.900 total.

“I think the weight training sessions over the winter is the main impetus behind the success I have had so far,” she said. “I was not able to spend much time on strength exercises since the season began. But I will concentrate on weight training again in preparation for the Olympics in August.”

Although it is not impossible, an Olympics medal might be a difficult task even for the 21-year-old South Korean gymnastics star. Essentially, the Pesaro World Cup was a self-assessment session for Son to test her Olympics status as the event featured world-class gymnastics figures including Russia’s Yana Kudryatseva, who topped the individual all-around in Pesaro.

Kudryatseva set a new world record during the competition with 76.450 points. The previous world record was also her own which stood at 76.100. “Many athletes were under heavy pressure before Pesaro,” said Son. “But I don’t think the composition of my program is inferior in any way to my competitors. I just need to practice more to refine my performance.”

Rhythmic gymnastics is scored based on a point deduction system. This means gymnasts are initially given 20 points total in two different categories, 10 in composition and 10 in performance, and whenever they make a mistake, gymnasts are penalized with certain number of points subtracted from the total score.

Son has increased the level of difficulty of her choreography by adding various rotations and dance steps and is currently working on improving the execution.

“It is about the detail in her performance,” said international rhythmic gymnastics judge Song Hye-jung regarding Son’s Olympic prospects. “She’s got to be able to finish her rotation without even a small wobble and how she catches the clubs must be perfect. That would add the much needed 0.7 to 0.9 points which could make all the difference in whether she will find herself on the podium. She must be determined and confident that she can overcome the Russian gymnasts.”

Son said, “I think the strict scoring system at the Olympics can be beneficial for me.”

Son has proved that she can handle the big stage and the pressure. During the 2012 London Olympics, when she was only 17-year-old, she placed fifth overall in the Olympics finals with 111.475 points, while other older and more experienced gymnasts were losing points after making mistakes.

“I want to do better and I will pace myself and prepare well during the remaining four months before the Olympics,” said Son