Tracing the birth of Korean pop

Tracing the birth of Korean pop 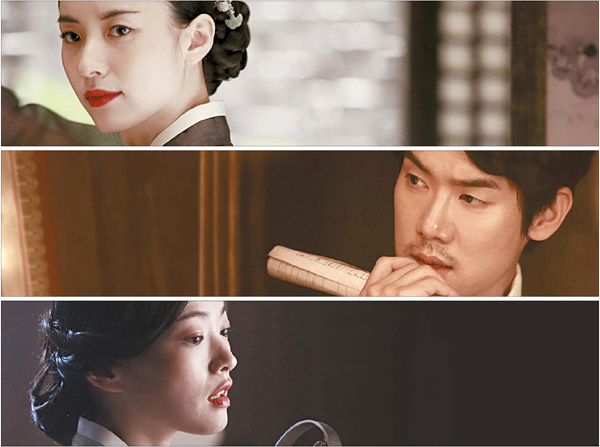 The Japanese colonial era (1910-45) was a turbulent period for Korea in many aspects.

Aside from the suppression and abuse people suffered from the colonial government, it was a time when Korea was going through a belated and deformed modernization.

In the area of music as well, it was a time when what’s called jeongga, a classical type of Korean song usually consumed by the upper classes, and Korean pop songs, which included more relatable sounds and lyrics, coexisted.

Park Heung-sik’s latest film, “Love, Lies,” picks up at this point, inside what’s called a gwonbeon, which is a talent agency where gisaengs (female entertainers) were trained to sing jeongga.

Unlike the negative stigma surrounding the job nowadays, gisaengs in this movie are described being like artists. In fact, the Korean title of the film, “Hae Eo Hwa,” literally means flowers that understand words.

Two of the best students at this gwonbeon are So-yul (Han Hyo-joo) and Yeon-hee (Chun Woo-hee), who are each other’s dearest friends. But born with natural talent for jeongga as well as a beautiful face that stands out from the rest, So-yul is the one who gets all the important invitations from influential figures, including the chief of the Japanese police (Park Sung-woong).

Although the two friends admire pop songs as much as the rest, So-yul and Yeon-hee promise each other to maintain their dignity as the last remaining gisaengs who sing jeongga.

However, their sisterhood starts to crack when the nation’s top pop song composer and lyricist, Yoon-woo (Yoo Yeon-seok), who is also a longtime lover of So-yul, becomes mesmerized by Yeon-hee’s voice and asks her to be his muse.

He convinces her to sing pop songs, which could better speak to the Korean masses and mend their wounds, rather than jeongga, which is only for the upper classes.

Encouraged by his words, Yeon-hee decides to leave the gwonbeon and starts to build new hope of becoming a renowned pop singer under the guidance of Yoon-woo.

However, the girls’ minds are not as simple as that. Gradually, So-yul’s mounting jealousy and feelings of betrayal get out of control and she decides to destroy the life of Yeon-hee.

“The 1940s was a doomed period for Koreans,” said director Park at a press junket on Monday. “People needed to change their names and had to learn Japanese as their mother language. But it was also a period when Korean pop first emerged and experienced its golden age. It was a perfect time period to tell the story of these two girls who wished to become pop singers.”

The film is definitely a feast for the eyes and ears. Han performs jeongga with perfection, having mastered the meticulous vocal techniques, while Chun delivers the sorrow and joy contained in the lyrics and melody of the pop songs she sings. Yoo also pulls off his character as a talented composer, playing the piano himself.

In terms of costumes, the film provides a rare glimpse into the trends of both hanbok (traditional clothing) and modern attire at the time. The reconstruction of Seoul, then called Gyeongseong, which in the 1940s encompassed influence from not only Japan but China and the West, also brings the film to life. And the springtime scenes featuring streets dotted with pale pink cherry blossoms make the film even more enjoyable.

Oasis, a dawn-delivery success story, to list on Korea's Kosdaq

[Editorial] The first impeachment of a government minister