In second week of KBO, teams start to show their stuff

In second week of KBO, teams start to show their stuff 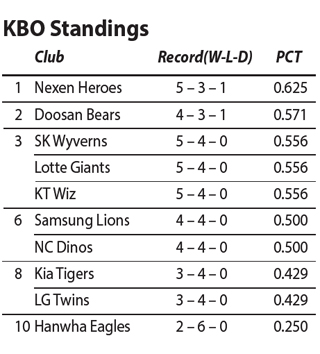 The Korea Baseball Organization (KBO) wrapped the second week of the season on Sunday, and though it’s too early to draw any conclusions, some teams have begun to distinguish themselves.

One is the Nexen Heroes. Before the season began, no one thought the Heroes would play well, particularly after losing the former home run king Park Byung-ho to the Major League after last season.

But with their new ballpark, the Gocheok Sky Dome, the Heroes are currently at the top of the league standings with five wins, one draw and three losses.

Considering two of its losses came from the games against the defending champion Doosan Bears and the No. 3 Lotte Giants, the Heroes seem to be in good shape.

The Bears have also had a promising start. After winning the Korean Series over the Samsung Lions last year, the Bears are a favorite to win the series again this year, and have been living up to that expectation.

The Bears have had four wins, one draw and three losses this year, and some Bears players are currently top-ranked in various categories.

Bears infielder Oh Jae-won is currently ranked fourth in terms of batting average with .393. He’s had 11 hits during 28 at-bats.

For home runs, the Bears catcher Yang Eui-ji is tied at the top with three homers. Yang has had six hits during 28 at-bats and eight runs batted in.

Finally, starting pitcher Dustin Nippert has played in two games, or 12 and 1/3 innings, and has grabbed a win in both.

Another team worth attention is the Lotte Giants. The Giants have lingered at the bottom pool of the standings for the past two seasons, finishing seventh in 2014 and eighth in 2015. But the Giants were determined to flip things around going into this season and their effort seems to be bearing fruit. Giants’ pricey closing pitcher Son Seung-lak has had three saves so far this season for the team, which has been struggling in closing.