Baby boomer spending cause for concern

Baby boomer spending cause for concern 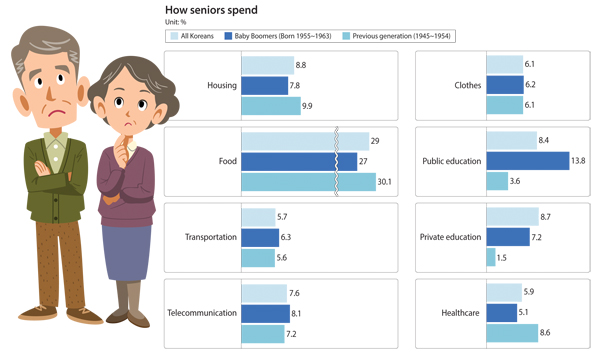 Korea’s baby boomers, the generation born between 1955 and 1963, are starting to retire, and research released Monday raised the possibility of a huge consumption cutback that could severely constrain the economy.

According to the Korea Institute for Industrial Economics and Trade (KIET), baby boomers are a major consumption power as they numbered 7.28 million, or 14.4 percent of the total population as of last year.

“They are more educated, wealthier and more westernized - because they had more chances to travel the world - compared to the previous generation,” said Cho Hyun-seung, a researcher at the KIET. “Currently they are spending large amount of money on education for their children. But their spending habits will change significantly from now on.”

KIET said baby boomers’ children will finish their schooling and the baby boomers will be eligible to receive government pension benefits starting from 2020.

The report warned that Korea needs to learn from Japan’s situation, since the two countries are moving on very similar paths.

Japan’s so-called Dankai generation, the postwar generation born between 1947 and 1949, started to retire from 2007, which is about seven years earlier than those in Korea. 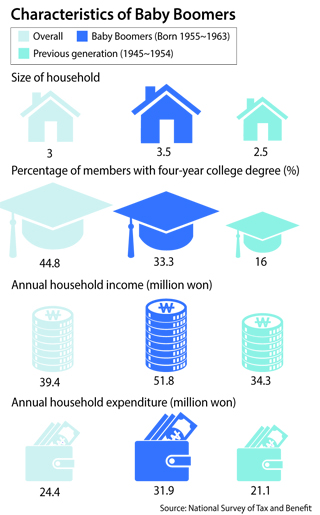 “Starting from the early 2000s, many companies started to invest huge amounts in industries catering to the aged in Japan, but they did not do as well as they expected,” said Cho. “Many companies failed to find the actual needs of the elders.”

The Dankai generation was different from the previous generation. They had interests in somewhat westernized areas such as bowling and the Beatles. They were more familiar with computers and smartphones.

“Typical elders tended to spend their money on supporting their grandchildren or buying necessities for them, but the Dankai generation tried to enjoy their lives and spent money on areas such as sports and cultural activities,” said Cho.

The Dankai generation started to receive government pension benefits in 2012, and has accounted for a large portion of the overall domestic market.

People aged 60 and over spent more than 60 trillion yen ($554.5 billion) in Japan in 2010, accounting for 40 percent of total consumption. That is estimated to reach 72 trillion yen in 2015 and 74 trillion yen in 2020, according to the Japan-based NLI Research Institute.

KIET said Korean baby boomers will likely follow a similar path and therefore it is crucial to prepare ahead of time to avoid Japan’s missteps.

“First of all, Korea needs more financial products that would allow seniors to increase disposable income, because many do not feel comfortable spending if they do not have stable income after their retirements,” said Cho at KIET.

Cho suggested that some government regulations on new industries for the aged need to be improved. He said health care services using information technology can grow rapidly in Korea since the baby boomers are familiar with smartphones and computers.

Thorough research on elders is needed to find their actual needs.

Meanwhile, other data released by the government last month said Korean society has aged to the point in which the number of senior citizens will match younger members of society in the near future.

Statistics Korea projected that by 2020, the seniors group will continue to grow while the younger 14-and-under group will shrink.