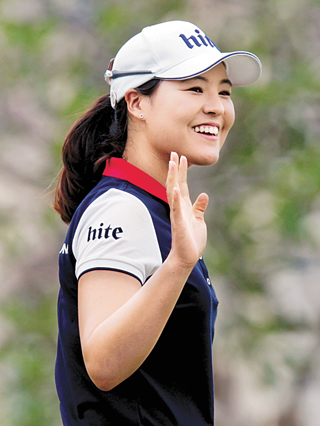 Korean golfer Chun In-gee waves to the audience during the final round of the Lotte Championship golf tournament in Hawaii. Chun finished the LPGA tournament 15-under to tie at second. [AP/NEWSIS]

Three Korean female golfers finished in the top 10 of the LPGA event, including Chun at second, Jang Su-yeon at fifth and Kim Sei-young at seventh.

After tying at second during the ANA Inspiration two weeks ago, Chun came out to shoot 15-under 273 in the Lotte Championship over the weekend, one shot short of the tournament winner Lee.

Chun didn’t get off to a good start initially as she went 2-over par in the first round after grabbing early bogeys in the first, fourth, sixth and eighth holes before the break on Thursday. In the second round on Friday, however, Chun came back to belt six birdies and one eagle on the par-4 11th to finish 5-under.

Chun then eagled the par-5 13th hole the next day while collecting six birdies and only one bogey to wrap up at 7-under. Finally, on the fourth and the last day of the event, Chun had three birdies each before and after the break to tally six and finish 5-under.

Overall, Chun had 10 bogeys, 21 birdies and two eagles to aggregate 15-under. Her driving distance in the final round was an astonishing 284.50 yards. Although she finished strong, Chun missed a 16-foot birdie on the 18th, which could have forced a play-off between her and Lee. “Very tricky on the green,” said Chun. “I try to enjoy my game, so I’m still happy.”

Chun has not finished below third place in all four LPGA events she has participated in this year. She is ranked ninth on the Official Money List according to the LPGA.com. She is also ranked sixth in the Rolex rankings as of April 11, 2016, and third among Korean golfers after Park In-bee and Kim.

It seems like Chun has made a full recovery from the back injury in early March that put her out for a month. If she keeps up with the current level of performance, she could be one of the favorites to play in the Olympics at Rio, where golf is to be played for the first time in 102 years. The national team for the Olympics golf will be determined based on the world ranking as of early July.

While Chun tied at second with Katie Burnett of the United States, Australian Lee collected the win in Hawaii with a 16-under score. Recovering from the 2-over third round, Lee chipped in an eagle on the par-5 13th hole and collected six birdies yesterday to amass 8-under for the round. This is the first title for the 19-year-old this season, as well as her second LPGA win. “It is definitely a big confidence boost,” said Lee after the win. “The last couple of weeks I was there, but not quite there. Now my game seems to be coming together really well.”

Korea’s Jang also had a good result over the weekend in Hawaii. Jang, who played with an invitation from her sponsor, drove two birdies, three bogeys and one eagle yesterday in the final round to finish the tournament 13-under 275.

Last year’s winner at Hawaii Kim placed in the top 10 as well, tying at seventh along with Megan Khang and Martin Mo of the United States at 11-under.