Exploring a famed author and his art

Exploring a famed author and his art 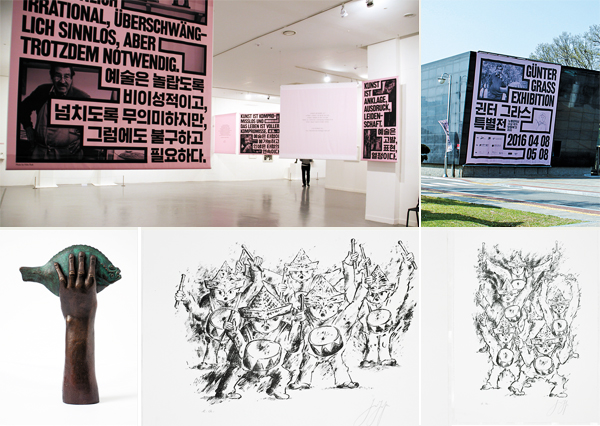 Top: The Danwon Art Museum in Ansan, Gyeonggi, exhibits the art of Gunter Grass, a Nobel laureate famous for his book “The Tin Drum.” Above: Sculptures, engravings and drawings are on display, including, from left, “Flounder in Hand,” “Funfmal Oskar I” and “Funfmal Oskar III.” [DANWON ART MUSEUM]

“The publication of my first two novels, ‘The Tin Drum’ and ‘Dog Years,’ and the novella I stuck between them, ‘Cat and Mouse,’ taught me early on, as a relatively young writer, that books can cause offense, stir up fury, even hatred, that what is undertaken out of love for one’s country can be taken as soiling one’s nest. From then on, I have been controversial.”

This is part of a speech given by Gunter Grass (1927-2015), who passed away last October, that summarizes his work in just a few sentences. In order to commemorate his achievements in the year following his death, the Danwon Art Museum, located in Ansan, Gyeonggi, is holding an exhibition to display art of his that can enhance understanding of his literary work. The Nobel Prize-winning author also identified himself as a sculptor, and his art was included in his novels. 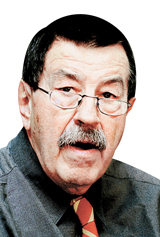 The Gunter Grass House provided some 100 pieces by Grass for the exhibition. The works will travel to cities around the world, stopping in Korea first. The exhibition was first on display at the Jeju Museum of Contemporary Art before moving on to the Danwon Art Museum. It will head to Seoul next.

Grass was a German writer who left behind famed works such as “The Flounder,” “The Call of the Toad” and numerous others. He constantly shed light on Germany’s misdeeds during World War II through his writing. He was heavily influenced by the fact that he lived through the war as a teenager. He also felt extremely ashamed of the fact that he himself was a Nazi. He later confessed the fact in his autobiography, “Peeling the Onion.”

His audacity of viewing his home country through an objective lens aroused some fierce criticism, especially in the early days of his literary career. However, his brave and honest literature is considered to have influenced German society to reflect and develop socially.

Not only did he write, he also drew illustrations, made sculptures and produced engravings to express his thoughts and imagination.

“It seems like there wasn’t any separation when it came to the arts for him,” museum docent Gang Hye-sook said while giving an explanation to visitors. “His artistic inspiration was expressed using diverse tools - with writing, drawing and making sculptures.”

In addition, Grass is known to have had a special interest in Korea, for Korea and Germany have many things in common, including a history of division. He also called for the release of dissident writers Hwang Sok-yong and Kim Chi-ha, who were imprisoned during Park Chung Hee’s rule, arguing for their freedom of speech. In addition, he visited Korea in 2002 for the Korea-Japan World Cup and recited a poem of his to celebrate the event.

While many consider his works very difficult and laborious to read, the Danwon Art Museum aims to help people understand them through special programs. Special lectures on April 23 and 30 will draw similarities between the artwork on display and the literary work by Grass that were turned into film.

In addition, the 1979 movie “The Tin Drum,” based on Grass’s novel of the same title and directed by Volker Schlondorff, will be screened on April 22 and May 6.

Docents at the museum are on hand to provide helpful explanations at 11 a.m. and 3 p.m. on weekdays and Sundays, and 11 a.m. and 2 p.m. on Saturdays.