Koreans in the Olympic limelight

Koreans in the Olympic limelight 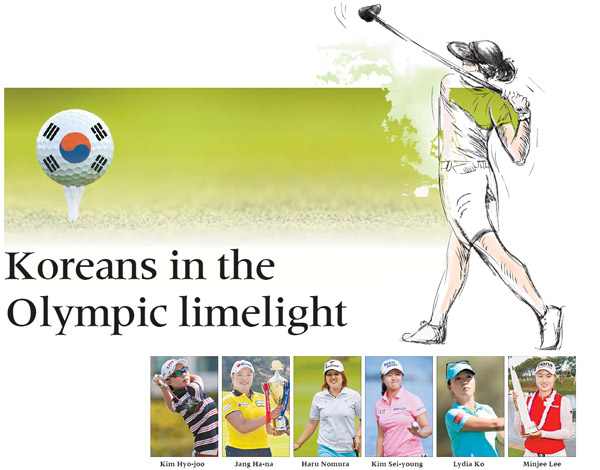 World No.1 Lydia Ko of New Zealand had a dream the night before the final round of the Lotte Championship. She saw her close friend Minjee Lee holding up the tournament trophy.

At that point, the possibility of Lee taking first place seemed slim as she finished the third round tied at six and five shots behind the leading group. No one thought Lee would grab six birdies while eagling the par-5 13th hole to mark 16-under for the entire event.

Ko’s dream came true after the final round as Lee danced the hula after winning her first LPGA title of the season in Hawaii.

“I had a dream last night that Minjee Lee winning the tournament,” Ko told Lee’s family before the final round began.

After Korean-Australian Lee claimed the title at the Lotte Championship, trophies in eight out of nine LPGA tournaments so far this season, including the ANA Inspiration, have been won by either Korean or ethnic Korean golfers. And with the Rio Olympics around the corner, these golfers are in the limelight.

Korea’s Kim Hyo-joo started the momentum by winning the Pure Silk-Bahamas LPGA Classic in late January. Korea’s Jang Ha-na picked up the baton from Kim to win the Coates Golf Championship on Feb. 7.

The next event, the ISPS Handa Women’s Australian Open, was won by Haru Nomura, who has a Korean mother and lived in Korea from the age of five until she graduated from a Korean high school.

The Honda LPGA Thailand is the only event so far that was won by a golfer not affiliated to Korea, Lexi Thompson of the United States.

During the HSBC Women’s Champions from March 3 to March 6, Jang claimed yet another LPGA win this season with Kim Sei-young finishing first in the next tournament at JTBC Founders Cup on March 21. Korean-New Zealander Ko then went on a two-event winning spree and had back-to-back wins at the Kia Classic on March 28 and ANA Inspiration on April 3 before Lee’s victory on Monday in Hawaii.

The LPGA tour this year is essentially a battleground between Korean golfers and their compatriots with different nationalities, who have made the top three in every event.

The runner up for the Pure Silk-Bahamas LPGA Classic was Kim. During the Coates championship, although Canada’s Brooke Henderson placed second, it was Chun, Kim and Ko that tied for third one shot behind Henderson.

Behind Nomura at the Australian Open was once again Ko, and behind Thompson in Thailand was Chun. In the HSBC championship in Singapore, Thai golfer Pornanong Phatlum placed second closely followed by Korea’s Amy Yang. Ko fought with Kim in the Founders Cup to finish runner up and Park In-bee, the World No.2, ended the next event at the Kia Classic second behind Ko. Finally, Chun placed second in both the ANA Inspiration and the Lotte Championship after Ko and Lee.

Given Korea’s current success in women’s professional golf, it is highly plausible that golf during the Olympics in August will be a battle royal amongst these players.

Currently Ko is likely to represent New Zealand in Rio, while Lee will represent Australia. Nomura will play for Japan and Korean-American golfers such as Michelle Wie have a good chance of making it onto the U.S. roster. In the top 100, according to the Rolex Rankings as of April 11, there are 36 golfers with Korean nationality and seven players with Korean ethnicity.