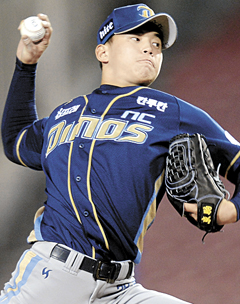 The pitcher surprised baseball fans when he was listed on the opening day roster for the Dinos right out of the high school, but what was more shocking was how well he rose to the opportunity.

Park played in seven games as of Sunday, with 6 and 2/3 innings and a 2.70 earned run average (ERA) while giving out three hits and two base on balls (BB) against 28 batters. Park’s walks plus hits per inning pitched (WHIP) is an astonishing .75, considering that the ace relief pitchers in the KBO have an average WHIP of 1.00.

Park’s trademark is his fastball. In the game against the Lotte Giants on Friday, Park threw one that hit 146 kilometers per hour (91-mile-per-hour). He played in the eighth inning, grabbing one strikeout while conceding one BB, collecting his first KBO hold, making him one of the youngest to do so in league history at the age of 18.

“I wasn’t so nervous,” Park said after the game. “I didn’t want to give out any BB and I ended up giving out one so that was disappointing. But it was fine since I had good results at the end. I am not the type that gets nervous easily.”

Even though in Sunday’s game Park gave out two hits and four runs, of which two were earned runs, he’s had perfect games before, with a zero ERA in the past six games.