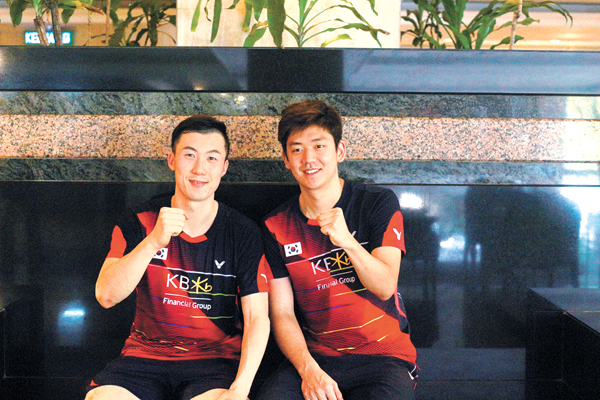 Yoo Yeon-seong, left, and Lee Yong-dae, right, are ranked No.1 in men’s doubles and will play in the upcoming Olympics at Rio. The summer games this year is likely to be the last Olympics for Lee. [KIM SIK]

Korea’s Lee Yong-dae and Yoo Yeon-seong were humbled last week as they prepare for the upcoming Rio Olympics. The world No. 1 badminton duo lost to compatriots Kim Gi-jung and Kim Sa-rang in the semifinals of the 2016 Malaysia Super Series Premier on April 9. The two Kims would go on to win the competition, defeating China’s Chai Biao and Hong Wei in the finals.


But it wasn’t all bad. Although Lee and Yoo lost in the event, the duo has already secured their tickets to Rio, while the Kims as well as the duo of Ko Sung-hyun and Shin Baek-cheol are competing for the last spot in the national team.


The two athletes refer to themselves more often as “we” than “I.” After forming a team in 2013, they have been at the top of the men’s doubles ranking for the past three years thanks to Lee’s ability to run the match and Yoo’s powerful offensive plays.


The JoongAng Ilbo met with Lee and Yoo earlier this month after their unexpected loss to discuss their plans for the next fourth months as they prepare for the summer games.

Q. What did you think about the match on April 9?

A. Lee: We couldn’t play our game. After the quarterfinals against Japan, I think both of us were worn out. We also failed to take the wind inside the stadium into the consideration.

Yoo: I think Kim Gi-jung and Kim Sa-rang wanted the win more than we did. They showed astonishing levels of concentration, especially during net play. We must play better next time.

How does it feel playing against other South Korean teams in international competitions?

Lee: The level of performance among the teams is more or less the same. Also, since we are ranked at the top right now, we feel the pressure. The opponents know more about us than we know about them.

Yoo: We’ve also been focused on playing against teams from other countries before. But we might have to play other South Korean teams in the Olympics, so we must think them as our opponents rather than our compatriots.

How are your conditions?

Lee: We hope to be able to get as many games in as possible before the summer. We plan to focus on developing physical stamina about a month before the Olympics.

Yoo: I had an injury on my right shoulder but I think it is almost fully recovered. I did not feel so good early this year but it is getting better. If we play the game at our pace, then we definitely have decent chance of winning gold at Rio.

How confident are you about the Olympics?

Lee: Just because we are ranked at the top does not mean gold is guaranteed. We go into the summer games as contenders. Personally, I think the Rio Olympics will be the last summer games of my career.

Yoo: We cannot go into the Olympics lighthearted. Of course our goal is gold but there can be so many variations and unexpected elements. Nothing is certain even for top-ranking teams. No one is a defending champion. Everyone is in the same boat and must fight for the honor.

Lee, why do you think the Rio Olympics will be your last summer games?

Lee: Other badminton players join the national team once they are out of college. But I had the chance to represent Korea before even I graduated from high school, playing for the team in the Asian Games at Doha in 2006. I earned my first Olympics gold in 2008 at Beijing in mixed doubles. The Rio Olympics will be my third Olympics. I love the sport but I have been on the national team a little too long, it feels like. If I have the chance to earn medal at the 2020 Tokyo Olympics, I would definitely take a shot at it but I think the Olympics this summer would be the most opportune moment for me to wrap up my Olympics appearances. I am not thinking about what will happen after the Rio Olympics.

What do you think is the most important thing you need to succeed on a big stage such as the Olympics?

Lee: Experience and confidence. There is limit to how much an athlete can develop his skills. What comes next is control over his mind, trust in himself and his ability to play on a big stage. For us, even when we are in a tight game, we always think we will come out winning the match. Even when we are losing, we believe that we can catch up. We talk about this kind of stuff a lot.