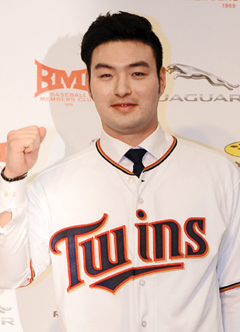 Minnesota Twins’ Park Byung-ho towered his third home run of the season and had his first multihit game on Tuesday against the Milwaukee Brewers. In the game which was shortened due to rain after the sixth inning, the Twins overcame the Brewers 7-4.

Going to the plate as designated hitter at the Twins’ home Target Field in Minneapolis, Minnesota, Park’s solo homer came when he went against Chase Anderson in the bottom of the fourth inning with a 3-1 count while the game was tied 3-3. In the fifth pitch, Park drove Anderson’s 145-kilometer-per-hour (90-mile-per-hour) fastball over the right fence of the ballpark. The true distance of Tuesday’s homer was 402 feet.

Park also added another hit to the right field in the fifth inning.

This is Park’s second homer in one week, after his record-setting power drive that travelled 466 feet to the center on Sunday in the same venue. Already with three home runs under his belt this season, Park’s runs batted in now records at four. His number for the day was 2-for-3.

What’s significant about Tuesday’s home run is that it came while Park’s supporters group, largely composed of local Korean fans, watched the game from designated seats titled ‘Byung-ho’s Balcony.’ The seats are assigned to the fans who attend the game to cheer for Park. They are located by third base and fans who occupy these seats are given baseball caps with Park’s logo on the side.