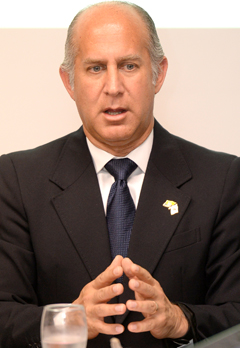 Ecuador’s Ambassador to Korea, Oscar Herrera Gilbert, called for international assistance on Friday after a 7.8-magnitude earthquake hit the country on April 16, leaving at least 587 people dead, according data of Risk Management Secretariat of Ecuador as of Friday morning.

The embassy said there is no information yet on tourists, including Koreans, who may have been injured or killed.

At least 155 are still missing in the country, with 8,340 in need of medical assistance. Some 25,000 refugees have sought temporary shelter in large facilities such as gyms, but the number of homeless, living in their cars and seeking open-air shelters in fear of further earthquakes, are too many to count.

“We had another aftershock just an hour ago,” said the ambassador at a press conference hosted at the embassy on Friday. “And we expect the scale of damage to be around $3 billion.”

“While we are not losing hope, the golden time to rescue people has already passed,” the ambassador added. “At this point, we are focusing our response on treating the injured and assisting refugees.”

Ambassador Gilbert added that while 25,376 refugees have been sheltered in government-provided complexes, many others, too many to count, have refused to enter a closed-off area in fear of another earthquake and are requesting open-air shelters, such as tents.

In addition to providing tents, the Korean government and civic organizations have expressed their interest in assisting the country in its recent plight.

After a meeting between the Ministry of Interior, Ministry of Foreign Affairs and the Embassy of Ecuador on Monday, the Korean government notified the embassy that it will be contributing $700,000 in humanitarian aid.

The Ministry of Health and Welfare and Korea Pharmaceutical Manufacturers Association will be donating medicine and supplies and Seoul and Busan city governments will cooperate to assist in the reconstruction of affected areas.