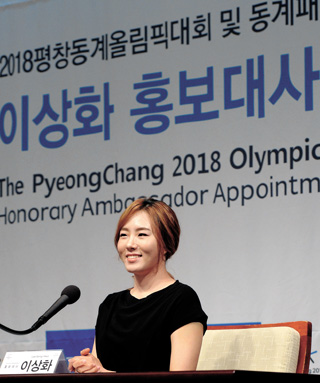 Korean skater Lee Sang-hwa smiles during the Honorary Ambassador Appointment Ceremony for the 2018 PyeongChang Olympics on Monday in Seoul. [NEWSIS]

Korean speed skater Lee Sang-hwa has been appointed as an honorary ambassador for the PyeongChang 2018 Olympic Winter Games.

During the Honorary Ambassador Appointment Ceremony on Monday that took place at the Korea Press Center in Seoul, the PyeongChang Organizing Committee for the 2018 Olympic and Paralympic Winter Games (Pocog) announced that Lee will be among the 16 honorary ambassadors for the upcoming winter games. The appointment indicates Lee’s status as one of the most distinguished athletes in Korea. Other notable ambassadors include retired figure skater Kim Yuna, Texas Rangers slugger Choo Shin-soo and Los Angeles Dodgers pitcher Ryu Hyun-jin.

Indeed, the 27-year-old skater is one of the most esteemed speed skaters in Korea, a two-time Olympics gold medalist who clinched golds during the 500-meter in Vancouver in 2010 and again during the Sochi winter games in 2014.

But these medals are just the tip of the iceberg when it comes to the honors she has claimed during her career. Lee has also done well at International Staking Union (ISU) Speed Skating World Cup events over the years, and is a world-record holder in 500-meter, finishing the race in 36.36 seconds at Salt Lake City in November 2013.

Consistently appearing at the Olympics since Torino 2006, the 2018 PyeongChang Winter Olympics will be the fourth in Lee’s career.

Lee has had a tough stretch recently, as she suffered a knee injury and other setbacks in 2015 that dragged her down for almost an entire year. But the tenacious skater managed to regain her title as the best in the world by taking gold in the 500-meter event at the 2016 ISU World Single Distances Speed Skating Championships in Kolomna, Russia, on Feb. 16. It was the first time she’d gotten first place in three years.

Pocog expects Lee’s presence as an honorary ambassador for the winter games will boost the marketing both in and outside of Korea for the 2018 winter games.

“As we well know, Lee has given the Korean people great joy and pride by bringing two gold medals from the past Winter Olympics,” said Yeo Hyung-koo, Pocog’s Secretary General. “It is an honor to welcome her as one of our honorary ambassadors. We expect her presence will boost the promotion of the PyeongChang winter games.

“The thing about Lee that we, the committee, value the most is her determination to overcome injury as well as the added pressure,” added Yeo. “We sincerely hope Lee reigns over the Winter Olympics in 2018 and makes the Korean people proud. Once again, we offer our sincere gratitude to Lee for agreeing to be our honorary ambassador.”

Upon receiving the letter of appointment from Yeo, Lee said “As a Korean citizen as well as a winter sports athlete, it is an honor to be able to participate in the winter games that will take place in my homeland.”

“I will do my best to give an outstanding performance for the fans in Korea,” she added.

When asked about her current condition as well as her future training agenda, Lee answered, “I am planning to start my training again for the next season in May. In preparation before the actual training, I am currently doing some rehab workouts for my knee. I plan to go to Canada for my training as I did last year prior to the upcoming season. My goal this year is to excel in front of local fans during the Speed Skating Championships that will occur here in Korea at Gangneung in February 2017.”