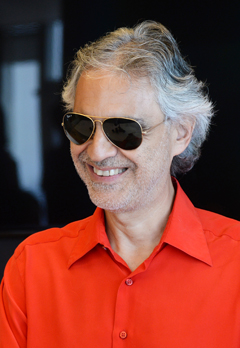 Andrea Bocelli arrived in Korea on Thursday for the first time in six years, in “better condition” than last time, according to the singer. This is his third visit to Korea.

He continued his world tour in Seoul yesterday at the Olympic Park Gymnastics Arena with conductor Eugene Kohn and flutist Andrea Griminelli - Bocelli is known to have a special love for the flute. At the concert, the Italian singer performed tracks from his latest album, “Cinema,” released in 2015.

At a press meeting held on the day of his arrival, Bocelli said he has good memories of Korea from his last visit in 2010. He added that he also enjoyed working previously with maestro Chung Myung-whun and soprano Sumi Jo.

Bocelli is a tenor who has touched many with his voice, especially with his songs “Time to Say Goodbye,” which he sang with soprano Sarah Brightman, “Because We Believe” and “The Prayer,” which he performed with Celine Dion.

However, Bocelli didn’t start out his career in music; he was originally a lawyer. After his law practice, he began studying under maestro Luciano Bettarini and Franco Corelli.

Bocelli also had a special connection with tenor Luciano Pavarotti, as he once performed “Miserere” in place of him, earning him much international acclaim.

“I have many [good] memories with Pavarotti,” he said, adding that he remembers having a close conversation with him before he died. “I try to keep the experience.”

Bocelli’s musical style has been termed “popera,” a genre that combines opera and pop, though the artist admits he himself is unsure of the categorization.

“I heard [about the term] but don’t know what popera is,” he said, “if it meant [simply] mixing opera and pop music.”

Bocelli said that he just does his best in each genre so that people can fully enjoy his music.