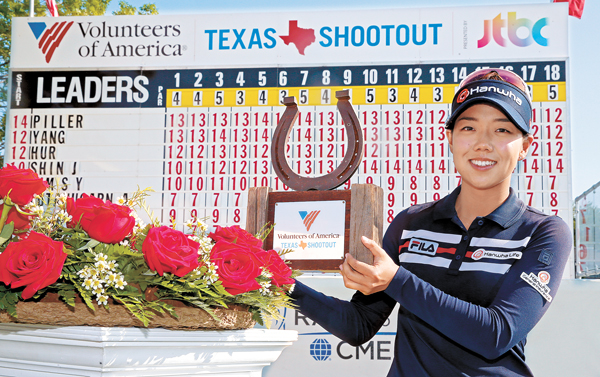 Jenny Shin tees off during the final round of the Volunteers of America Texas Shootout Presented by JTBC on Monday. [AP/NEWSIS]

Shin, 24, closed the final round 4-under 67 free of bogeys and with four birdies.

“Still in awe,” Shin said according to LPGA.com. “Nothing has registered yet. I wanted to talk to my mum, but I was on the verge of tears so I hung up without really her answering the phone. I think it will hit me as soon as I talk to my mum, yeah. I don’t have anything going on right now.”

By the end of the third day, it was Gerina Piller of the United States who topped the leaderboard after shooting 14-under, with Shin just behind her at 10-under. The next and final day of the tournament was rough with strong gusts of wind. Despite the unfavorable weather conditions, Shin was composed and notched two birdies in a row in the 4-par second hole and 5-par third hole. She added another birdie on the fifth hole to narrow the gap with the leader by making the turn three strokes under at 33. Her next birdie came immediately after in the 5-par 10th hole. While Piller began to stumble, Shin went on-par in the remaining eight holes of the final round. Going bogey-free for the final 43 holes, Shin aggregated 14-under 270.

Although without a win until Monday, Shin has been a constant presence in the LPGA. After moving to the United States when she was nine years old, Shin began taking her sport more seriously. Shin’s talent became apparent when she topped the United States Girls’ Junior Golf Championship in 2006. Upon graduating from high school in Torrance, California, Shin decided to maintain her Korean citizenship. After turning pro, Shin joined the LPGA in 2011 and ranked 55th in the LPGA Official Money List that year. The golfer has grabbed 20 top-10 finishes in the years since. 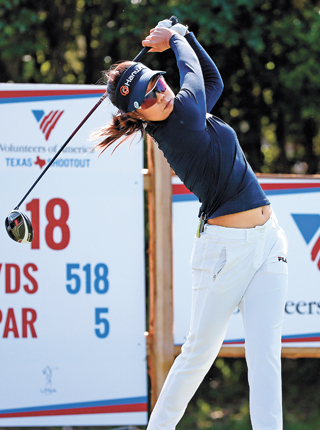 Jenny Shin poses in front of the leaderboard with her trophy after winning her first LPGA title at the Volunteers of America Texas Shootout Presented by JTBC on Monday in Irving, Texas. [AP/NEWSIS]

Until now, Shin’s best finish was second place at the 2012 HSBC Women’s Champions. Shin lost to Angel Stanford of the United States in a playoff, and she continued to be haunted by the loss. For the next few years, she would get close to winning a title, but wouldn’t be able to see it through.

Having decided that the problem was her endurance, Shin began to train intensely beginning last year. She now runs three to four kilometers every day and has lost about 10 kilograms (22 pounds).

“After five-and-a-half years of people questioning me when the first win is going to be, I’ve learned how to deal with it, like the stress mentally,” said Shin during the winner’s interview. “So I think I changed my mind. My goal wasn’t victory. It was more to play good golf and entertaining the fans, enjoying myself out there.”

Her dedication allowed her to thrive, evident in her performances this year. This season alone before her win on Monday, Shin tallied three top-10 finishes, including a tie for fourth at the LPGA KIA Classic in March.

“I think I’ve been in contention so many times that I’ve kind of learned how to tune it out,” added Shin, according to the LPGA.com. “I’m not sure I can repeat it exactly the same if I have a chance next time. I think every year I become a better player and I get a little bit more experience. And I think I’ve gotten a lot out of it every time I go through this, so hopefully next year will be better, the year after that will be better.”

When asked about how she will celebrate her win during the winner’s interview, Shin simply smiled.

After her win over the weekend, Shin is projected to move up in the Rolex Women’s World Golf Rankings from No. 38 to No. 24.

Shin’s compatriots Amy Yang and Hur Mi-jung along with Piller were tied at second after finishing the event 12-under. Four other Korean golfers also finished in the top 10, including Choi Na-yeon, Ji Eun-hee and Kim Sei-young at seventh and Lee Mi-rim at 10th. The next LPGA tournament is the Yokohama Tire LPGA Classic, which will take place in Prattville, Alabama from May 6-9.