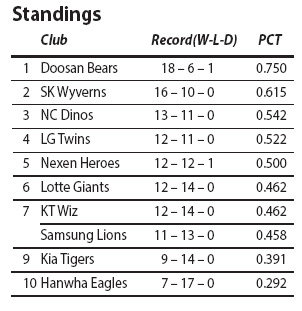 It’s been a month since the Korea Baseball Organization (KBO) season began, and depending on who you ask, April was either a dream or a nightmare.

The defending champion Doosan Bears had an excellent start. The team recorded 17 wins, one draw and six losses, the best record the club has had in April since its establishment.

The success was due to picture-perfect symbiosis. When the pitching lineup was struggling, the batting lineup more than made up for it, and in return, pitchers stood their ground on the mound when batters just couldn’t find the ball.

The numbers already suggest that the Bears will inevitably come out on top this year. Its team earned run average (ERA) was 3.21, the best in the KBO in April. The team’s batting average (BA) was .285, second only to the Lotte Giants’ .293.

The Bears were closely chased by the SK Wyverns, who had 16 wins and nine losses in April. The Wyverns’ team ERA for the month was 3.49, ranked third after the Bears.

While a few teams celebrated, the Hanwha Eagles were not among them.

Before the season began, many experts suggested the Hanwha Eagles could go all the way to the postseason this year, and maybe even to the Korean Series, based on the strength of the team’s coaching staff and its roster, the most expensive in the KBO.

But the Eagles have been unable to take flight so far, crashing to the bottom of the ranking after many of the pitchers in the starting lineup became injured. The relievers often threw more than they could handle and went into each game utterly exhausted. By the end of the month, the team had six wins and 17 losses with a team ERA at 5.70 and BA at .263, the worst among all teams in the league. However, as the team concluded the last month of April with four wins out of the five games it played, some fans are hopeful that perhaps the Eagles will make its comeback.

Another team that caught everyone by surprise in April with its poor performance was the Samsung Lions, the winner of the Korean Series from 2011 to 2014 and the runner-up last year.

As of April 30, the Lions had 11 wins and 12 losses, an unfortunate record that’s due almost entirely to the team’s pitchers. While the hitters were solid, ranking fourth in BA with .273, only .001 behind the third place Nexen Heroes, the team’s ERA was 5.33, placing the Lions at the ninth in ERA, above only the Eagles.

Records in April don’t make guarantees about how the rest of the season will look, but historically it’s a decent indicator of the standings by the end of the regular season in September. 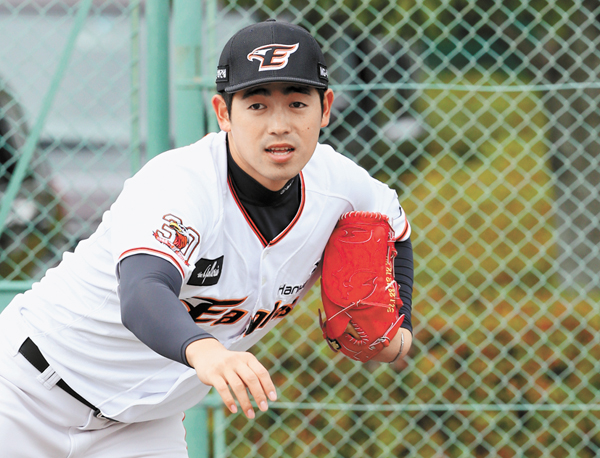 Hanwha Eagles’ right-handed pitcher Lee Tae-yang returned to the mound on April 23 for the first time since having surgery on his right elbow in April 2015. His return performance didn’t disappoint the team, which could definitely use a boost in its pitching lineup.

In the game against the Doosan Bears, Lee went to the mound as starting pitcher. During the three and 1/3 innings he pitched, Lee conceded four hits, one of them a home run, one base-on-ball and three earned runs. He also carded one strikeout. The Eagles lost the game 2-3 and Lee collected a loss. Although the numbers might seem unimpressive, considering that it was his first game back, Lee’s performance Saturday bodes well for the team.

The ligament surgery Lee underwent in typically requires nine to 12 months of rehabilitation, not to mention the time needed to get back into the physical shape to pitch. But Lee came back less than a year after his surgery, raising concerns that his return might be a little premature. Some even criticized the desperation of the Eagles coaching staff evident in forcing a recovering pitcher to return.

But the pitcher seemed happy to be back, saying that the rehab process was long and tedious.

“I often grew impatient during the recuperation process,” he said. “The most difficult thing about the rehab was repeating the same boring routine over and over again. But the thing about recovery sessions was that if I slacked off, it was immediately reflected to my progress. Thus, even though it was boring, I had to really push myself.”

Enduring through all that, the Lee that appeared on the mound on April 23 seemed composed and ready to put all concerns to rest.

Lee began pitching in bullpen sessions last month. After adjusting his arm to fastballs, he started throwing changeups early this month. Although his ball control wasn’t the same as before, he had no problem on Saturday, showing decent control and pace after throwing 11 sliders, six curveballs and six forkballs.

The speed of his fastballs was somewhat worrisome. Although his fastballs averaged 140.6 kilometers per hour (87 miles per hour) in the first inning, they got noticeably slower starting from the second inning, staying around the mid-130 kilometers.

But Lee says fastballs are the least of his worries.

“I am not too concerned about the speed,” he said. “I am sure I will be back to my old self after my rehab is fully completed.”

Lee threw his second game of the season on April 30 against the Samsung Lions, pitching for four and 2/3 innings, conceding four hits, including one home run, one base-on-ball and two runs while collecting one strikeout.

“I need few more months to recover my fastball velocity,” Lee said, “but my changeups were decent.”

He was also thankful that his rehab process went so smoothly.

“I had no pain the day after my first pitch on April 23,” added Lee. “I was little bit sore but no pain, which I am very grateful for. A lot of pitchers suffer from pain after surgery. I think I am lucky in that way.”