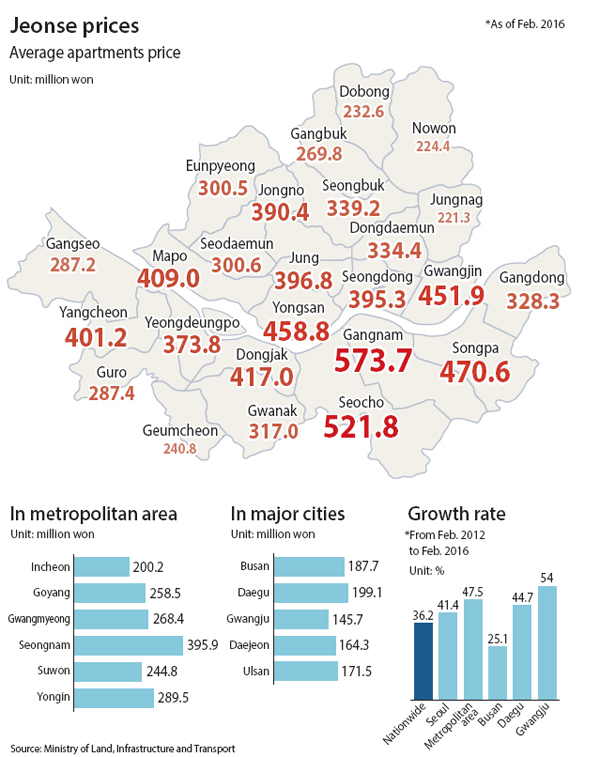 Mr. Choi, who is living in an 84-square-meter (904-square-foot) apartment in Seongbuk District, northern Seoul, through a jeonse, or lump-sum deposit rental contract, is worried about extending his lease deal when it expires soon.

“I seriously don’t have the money to pay the increased amount,” Choi said. “I either have to take out a loan or have to find a new place to live.”

Seoul’s average price for jeonse rose more than 100 million won in four years. As the price went up, that of relatively cheap apartments also rose. Monthly rental contracts, on the other hand, have gotten cheaper, as more rooms have become available.

The JoongAng Ilbo reviewed data released by Ministry of Land, Infrastructure and Transport starting from 2012, which covered a total of 154,852 contracts.

The average deposit for jeonse increased 36.2 percent in four years to record 227.5 million won as of February nationwide. The growth rate is 1.6 times more than the state-run Korea Appraisal Board’s figure of 22 percent.

The JoongAng Ilbo’s data review was higher than the Korea Appraisal Board since the newspaper only considered the actual contracts, while the board included units that are on the market even though a lease has not been signed yet.

In Seoul alone, the price rose 41.4 percent, or by 110 million won, to 372.6 million won from 2012 to this year. Prices in the districts of Dongjak, Songpa, Seongbuk and Eunpyeong rose more than 50 percent. In the southern districts of Gangnam and Seocho, prices rose by 43.9 percent and 26.7 percent, respectively.

“Jeonse prices in regions that are a little further away from the central regions rose significantly,” said Park Won-gap, a senior researcher at KB Kookmin Bank. “It appears people chose Songpa and Dongjak over Gangnam and Seocho since the prices in those regions were relatively lower.”

Other cities in the Seoul metropolitan area also saw substantially increased prices. Jeonse in Incheon and Paju, Gyeonggi, rose by 75 percent and 79 percent each over four years.

Jeonse in Gangnam District, southern Seoul, was the most expensive in the city in February. The average price was 521.8 million won, while Jungnang District, northern Seoul, saw the cheapest at 212.3 million won.

The average price for a unit in the districts of Geumcheon, Nowon and Dobong was around the 200 million won level. Meanwhile, the price in Gangnam was 1.6 times higher than in Jungnang.

“Homeowners prefer receiving rent over jeonse, so there were more units available, and it helped the price to go down,” said a number of real estate agents.

Rent was the most expensive in Seocho District, southern Seoul, at 1.05 million won, and was followed by Yongsan District, northern Seoul, which recorded 1.04 million won as of February. The price in Yongsan was high, as there are a huge number of large-size units, and rent for U.S. soldiers there are relatively more expensive. The average price in Gangnam was 1.03 million won.

Many industry insiders believe that the price of jeonse will continue to go up, but the growth rate will slow down a bit since many tenants are not happy with jeonse prices that aren’t much different than the cost of buying a unit.

“More units will come onto the market in the near future, and this will help the jeonse price go down a bit,” said Kim Deok-re, a senior researcher at the Korea Housing Institute.