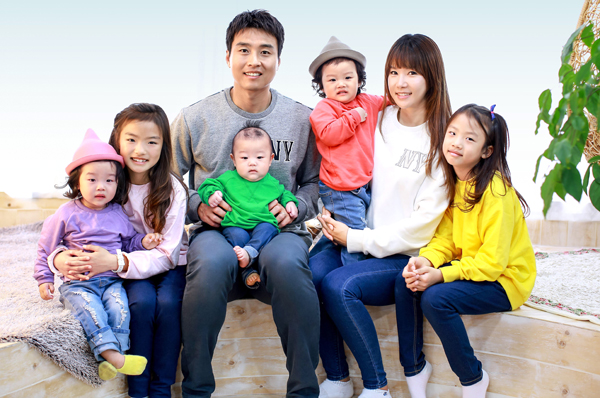 A record scorer in the K-League with 250 total points to his name, 184 goals and 66 assists combined, Lee Dong-gook has gained more fame in the last 18 months by appearing in a popular child-rearing reality TV show than he ever did in his last 20 years of playing football, thanks to his five children.

Lee, a veteran striker currently playing for the Jeonbuk Hyundai Motors team, has been regarded as a true patriot for combating the nation’s miserably low birthrate of 1.3 births per woman by raising five children. Among the developed members of the Organization for Economic Development and Cooperation, Korea has ranked last by fertility rate for the last 15 years.

The JoongAng Ilbo met with Lee, the breadwinner of the large family, on May 2 to celebrate what is known in Korea as “the month of family.”

“It feels good to talk about my children instead of football,” Lee said with a smile on his face. “Children are like football goals. The more the merrier.”

Lee became a father in 2007 when his two fraternal twin daughters, Lee Jae-si and Lee Jae-ah, were born. At the time, he was playing for Middlesbrough in England. In 2013, Lee had another pair of fraternal twin girls, Lee Seol-ah and Lee Soo-ah, and a year after that, in November 2014, he had his fifth child, the only male among the siblings, Lee Si-ahn.

Lee’s case is indeed a rare one given that the odds of having two sets of fraternal twins are about 12,500 to one.

Lee and his children became famous after appearing on a popular reality show called “The Return of Superman,” in which celebrity fathers look after their children without the mother for 48 hours.

Due to the program, Lee is better known to the people as “Daebak-i’s father,” instead of by the sobriquet “the Lion King,” which Korean football fans gave him. Daebak-i is the nickname of Lee’s son, which literally means “big hit” in Korean, and can be used to mean “awesome.”

“When I told Jae-ah that her mother was pregnant with a fifth child, she yelled ‘daebak,’” Lee recalled. “So we decided to nickname him ‘Daebak-i.’”

Lee says he had moments when he wished his fifth child had a twin sibling, too, commenting, “I was worried that the baby might feel lonely all by himself in his mother’s womb.”

When asked how he felt about his youngest son’s popularity, he said with laughter, “It took me 20 years to become a renowned football player, but he became famous in just 18 months.”

Lee’s eldest daughter, Lee Jae-ah, now in her third grade of elementary school, has been preoccupied with tennis lately and even won a national tennis championship for first to second grade elementary students, evidently having inherited her father’s athletic capabilities.

In September 2014, after scoring a goal in a tryout match against Costa Rica, Lee emulated his daughter’s tennis strike in celebration. After watching the goal ceremony, he says, Jae-ah told her mother that after winning the Wimbledon Championship, she will perform her father’s volley shoot, Lee’s specialty in football.

“I felt happy and proud when I heard about that,” Lee said.

In early 2016, to commemorate his 10th wedding anniversary with his wife, Lee Soo-jin, 37, they took wedding photos together with their family.

“Ten years ago, there was only me and my wife,” Lee said. “But now, there are seven of us.”

“I realized the greatness of Korean mothers after I tried changing my children’s diapers, cleaning the house and doing the laundry,” Lee said. “Since then, I saved my wife’s phone number under the name ‘Super Mom,’ instead of her actual name.

Although it’s sometimes exhausting to look after five children, when I see them growing day by day, I think to myself that it’s worth having five of them.

“Even when only one of them is missing, it makes me feel empty,” Lee said.

Lee is also famous for his affection toward his wife. According to Lee, he fell in love with her at first sight. His wife was living in Hawaii then and was visiting Korea for a holiday.

He added that during the time the two were going out, they made so many overseas phone calls that if they were to add up all the phone bills, it would easily exceed “a few hundred million won.”

Lee had an unusually high number of difficulties in his career. In 2006, for instance, right before the FIFA World Cup in Germany, he suffered from an injury to his cruciate ligament, and thus was left out of the national team selection.

“Whenever I felt lost and exhausted,” Lee said, “my wife stood next to me and told me to think as if we were shooting a movie and that it would definitely end with a happy ending.”

Proving his wife’s prediction right, Lee’s football life has been improving recently. Since the beginning of 2016, he scored seven goals in the K-League and the Asian Champions league. As Lee’s football career now looks better than it did during his peak, some say time is moving backwards for him.

Lee said that until he quits football, his goal is to become a member of the national team.

“Every father wants to become the greatest man to his children,” Lee said. “I also want to become a superman and protect them.”