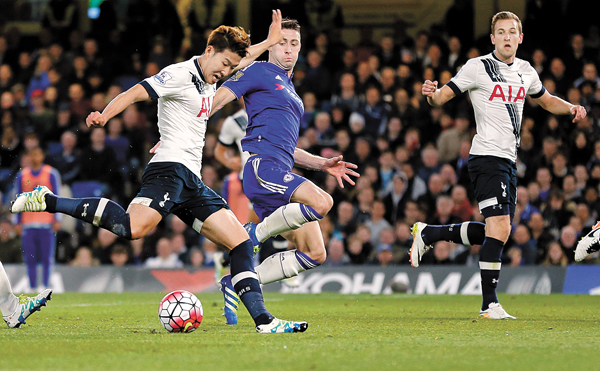 Tottenham Hotspur’s Son Heung-min takes a shot during the English Premier League match against Chelsea on May 2. Son’s performance in the pitch throughout the season has created divided opinions about the Korean footballer. [AP/NEWSIS]

Tottenham Hotspur’s Son Heung-min remained close-mouthed when he returned to Korea this week at the end of his first season in the English Premier League (EPL).

While Son joined Spurs with much anticipation and excitement, local football fans and media in England are divided on his performance after his first season with London club.

He refused to talk to reporters at Incheon Airport on Tuesday when he arrived home, which some interpreted as a possible sign of regret and frustration. However, his lack of response was curious as Son’s first term in the top English football league was anything but a disappointment, scoring eight goals and dishing out five assists, including four goals and one assist in the regular season.

The 23-year-old transferred to Spurs from Bayer Leverkusen before this season for ￡22 million ($32 million), making him the most expensive Asian player in EPL.

Tottenham finished third in the league standings and has secured its ticket to the UEFA Champions League next year to compete against the cream of European teams.

What may have unsettled Son was his forced absence in mid-season due to plantar fasciitis, which causes heel pain. And during his layoff, his competitors in the starting lineup - including Argentinian Erik Lamela and English footballer Dele Alli - improved their performance which left Son at a disadvantage on his return.

Although he sporadically showed up in the pitch and scored, his regular presence in the team was undoubtedly at peril. But, towards the end of the season, with Alli under suspension, Son played in the three final matches and scored in two. Son missed 10 games during the EPL’s 38-game season.

While Son’s performance has pleased Korean fans, opinions are divided in England.

An article in the Daily Mail, one of the largest circulation newspapers in the U.K., evaluated 10 football players this season with the highest transfer fee. Son was given 6.5 points out of 10, placing him fourth.

“Son scored the winning goal during his first Premier League appearance for Tottenham at White Hart Lane, against Crystal Palace on September 20,” the Daily Mail wrote. “Overall he was a useful squad member as Mauricio Pochettino’s side pushed for the title.”

To conclude its appraisal on Son, the newspaper said that “Son Heung-min will hope to build on a promising start to his Tottenham career next
season.”

Among the top 10 players with the highest transfer fee, first place in their evaluation went to Anthony Martial, who went from Monaco to Manchester United for a ￡36 million ($52.7 million) transfer fee. “Frenchman Martial has been Louis van Gaal’s go-to man and star outfield player this campaign,” according to the Daily Mail.

In comparison, there were some harsh criticisms for Son’s maiden season in English football. According to the HITC Sport, Son’s presence for Spurs was less than impressive and that, especially during the final game of the season against Newcastle. The Spurs were trampled by United 5-1 and Son was “the worst of the bunch … who was hooked at half-time by Mauricio Pochettino after barely contributing anything of note.”

HITC Sport said, “Son was a big money summer signing from Bayer Levekusen last summer, with more than ￡20 million ($29.2 million) invested to sign him. After a promising start he faded badly, and scored just four goals in 28 Premier League appearances, with just one assist.”

In Tottenham’s defeat to Newcastle, Son “showed the worst aspects of his game, lost tactically and defensively,” and that he “faces a big challenge next season to show he has fully adapted to the Premier League, and needs to cut out performances like the one at St James’ Park if he is to take his game to the next level.”

With different attitudes towards Son’s abilities and performance, Son has a chance to silence critics this summer when he plays in the Olympics as the wild card for the Korean side. Son will settle into Paju National Football Center on May 23 and prepare for the upcoming friendlies against Spain and Czech Republic. After the friendlies, Son will join the U-23 national team in preparation for the Rio Olympics.