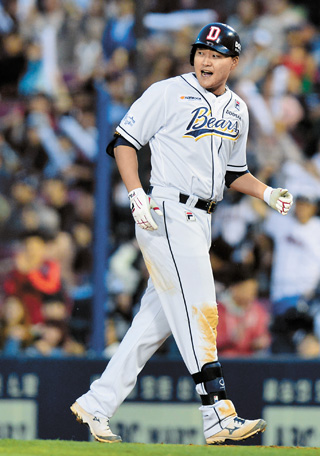 There is no tomorrow but only today for the Doosan Bears’ Oh Jae-il.

As of May 22, Oh has recorded a .407 batting average (BA), seven home runs and 26 runs batted in (RBI). His slugging percentage is at the top of the league at .714, and in on base percentage, he ranks second at .491. Oh began the season with a furious rush and has solidified his position as the cleanup batter of the Bears at fourth in the batting lineup, which is a position designated to one of the best hitters of the team. He’s even pushed foreign batter Nick Evans to the side. Although Evans is in the second division league due to an earlier poor showing, the Bears’ batting lineup is solid, largely owing to Oh’s recent performance.

“I try not to be hesitant on the base and swing my bat with confidence,” said Oh. “This has been something that manager Kim Tae-hyung and hitting coach Jang Won-jin requested of me.”

“I do feel more confident when I make steady contact with the ball, and this is mainly why I am maintaining a solid record at the moment,” Oh added.

Oh has been called a rising star for quite some time now, receiving a plethora of expectations and opportunities. Since joining the Korea Baseball Organization (KBO) straight out of high school in 2005 with the now-extinct Hyundai Unicorns, he played for the Nexen Heroes for three years from 2009 to 2011 before joining the Bears.

Moving around from place to place, however, he hasn’t been able to live up to all the hype and anticipation that surrounded his name. But after years of struggle, Oh is finally delivering a star performance. A late bloomer, perhaps, but it’s true what they say: better late than never.

“I’ve often eagerly looked forward to the season when I started off well and was eventually disappointed,” said Oh. “I didn’t want to repeat that this year. So I decided this season that I would take one game at a time, looking the next game and not lingering on past games or looking ahead to future games.”

Although his hitting spree slowed down a bit after April, he didn’t regress into a slump, as he has in the past. In the first game of May, on May 1, which he played against the Kia Tigers, Oh had his fourth homer of the season against Yang Hyeon-jong, arguably one of the best pitchers in the KBO at the moment, only to smack out another one on May 4 against the LG Twins.

His batting was especially lethal on May 18 when he went 3-for-4 against the Tigers and grabbed three RBIs. His performance so far in the season peaked on May 20 against the Lotte Giants when he went 3-for-4, smacking two home runs, collecting six RBIs and driving in four runs. The Bears crushed the Giants 19-5, thanks to Oh’s brilliant effort.

He was often criticized in the past as being impotent against left-handed pitchers, but now, after hitting a home run against Yang on May 1, Oh has cleanly proven his nay-sayers wrong. He has been aggressive from the first pitch and has not backed down during his at-bats.

“My hitting pace has slowed down,” Oh explains, “but I am still hitting well so I’m not too worried.”

Today Oh has grown not only physically but mentally. No longer does he become overly elated about a home run nor does he cling to the past. “I just need to do my part every day,” Oh said. “The only thing I have to do is do my best in each and every game.”

An unmistakable peace of mind is reflected on Oh’s face these days, one that is fully accompanied by the unreserved trust of Oh’s coaching staff and teammates.

“After finding mental peace,” he said, “I feel much more comfortable at the plate. I’m going to do my best without being too attached to records or numbers.”