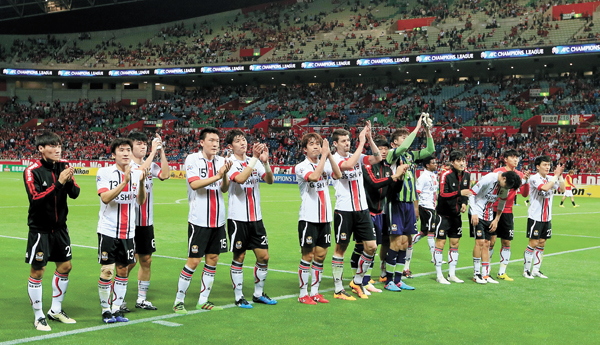 FC Seoul players show their appreciation to fans after a 1-0 loss against Urawa Red Diamonds on May 18 in the ACL Round of 16 match. Seoul plays Urawa again today at home. [NEWSIS]

“We will prepare ourselves for 180 minutes,” said FC Seoul’s manager Choi Yong-soo, in anticipation of the Asian Champions League (ACL) Round of 16 first-round match on May 18 against the Urawa Red Diamonds in Saitama Stadium 2002 in Saitama, Japan. What Choi was insinuating was simple; it takes two games to get to the quarterfinals in the ACL.

As Choi said, Seoul has to play the Red Diamonds twice in order to get to the next round of the knockout stage of the ACL, and this complicates things. The coaching staff of each team must take different variations into an account in planning their strategies. Putting all their eggs in just one basket would be recklessly foolish. Coaches have to see the bigger picture. Subsequently, their tactics for away games and home games differ substantially.

Depending on the result of the first match, how the teams approach the second game often changes, as well. So in that sense, it’s not just 90 minutes that determines everything. The team and the players must prepare for 180 minutes. And that’s what Choi was getting at.

Coming out of a 1-0 loss against the Diamonds in their first game, Seoul has just finished the first half of that 180-minute game. Granted, the first half was a failure for Seoul and Choi, and a rather disappointing one at that. The goal by Tomoya Ugajin of the Red Diamonds in the 15th minute of the match was initially intended to be a cross, but ended up rattling the right side of Seoul’s net with no Seoul defender in position to sever the crossing attempt. Tragic, yes, but a goal is a goal. Palpably fazed, Seoul could not get their heads into the rest of the match and failed to net an equalizer.

Obviously, this was not the usual Seoul that is widely known for its puma-like offensive prowess. Now, FC Seoul has to edge Urawa by more than a two-goal difference in order to advance to the quarterfinals. If Seoul wraps up the next game 2-1, it won’t go to the next knockout stage, since more points are given to away goals. Any way you look at it, Seoul is making an uphill shock attack against cannon fire.

But Choi isn’t worried. He has the next 90 minutes to turn things around and there are three factors that keep Seoul hopeful in its bid for the ACL championship title.

First of all, Seoul’s offense is expected to catch fire. In the first round, although Seoul lost the match, it created a greater chance than the Diamonds. If the strikers weren’t as confounded as they were in the wake of the unexpected goal by the Red Diamonds, players such as Carlos Adriano, Dejan Damjanovic and Park Chu-young could easily have netted multiple shots.

Seoul’s death-dealing ways in front of the net are well-known, piling in 17 goals in the Group Stage to top the standings in most goals scored. Adriano scored ten goals while Damjanovic netted three, keeping at bay others’ attempt to match Seoul in scoring. It’s no surprise then that they had an off day. Players cannot always be at peak performance. Now that they went a game without scoring a goal, however, the duo should be ready to pile in shots for their team. Scoring more than two goals shouldn’t be a problem for the duo, considering their past performance in the ACL, as well as in the K-League. After all, the two players tallied five goals in a single match against Buriram United of Thailand earlier in the season. Seoul’s offense is likely chomping at the bit.

Secondly, the next Round of 16 match takes place at home in the Seoul World Cup Stadium.

The Seoul-based team has always been sure-footed on their home turf. During the Group Stage of ACL, Seoul conceded no losses at home, with a home record standing at two wins and one draw.

It all began on March 1 when Seoul edged Sanfrecce Hiroshima of Japan by 4-1. Although the team came out with a draw in the next home game on April 5 against Shandong Luneng FC of China, Seoul defeated Buriram by 2-1 two weeks later.

Even in the K-League, Seoul only has one loss at home. The driver behind such success in Seoul is the blaze of support from enthusiastic fans at home. Now, in the second match of ACL Round of 16, FC Seoul and Choi would like to present its fans with a comeback win, as they hope to see their beloved club bring home the ACL trophy.

The last hopeful sign for Seoul is that Seoul took a week off in the K-League for the ACL. Seoul postponed the 11th round match of the K-League, which would have been last weekend, to June 6, in order to go against Urawa in peak condition. The last game against the Red Diamonds on May 18 came only four days after the K-League away match against Seongnam FC. Without a question, Seoul’s players were yet to fully recover from fatigue. What’s worse, starting members of Seoul normally go an entire match without substitution.

But after sufficient rest, Seoul meets the Red Diamonds fully charged and ready to go. The only thing left to do now is crush Urawa.

After the first round of the Round of 16 match against Urawa, Choi said, “It’s not over yet. We will be ready and advance to the quarterfinals.”

FC Seoul takes on Urawa once more tonight at home in the Seoul World Cup Stadium at 7:30 p.m.