Giants infielder Oh fights injury to get back onto the field

Giants infielder Oh fights injury to get back onto the field 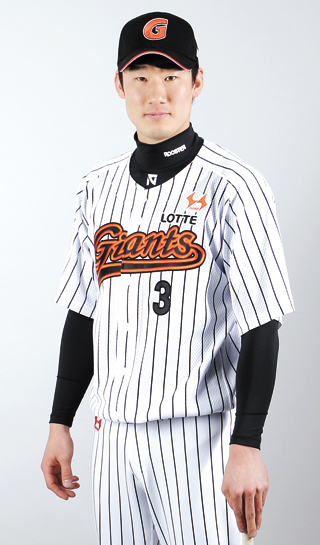 Lotte Giants infielder Oh Seung-taek is determined to return from his shin injury as soon as possible.

That has been Oh’s line for weeks now, but his tenacity was particularly apparent Tuesday, when he was spotted without his cast at Sangdong Baseball Stadium, the ballpark for the Giants’ second division team.

The 25-year-old fractured his left shin on April 8 during a KBO game against the Samsung Lions. Although the recovery time differs, it typically takes between two to three months for the bone to mend. Then comes rehab.

If Oh were a typical player, this would mean he would probably be out until August or September. But he’s been making unexpectedly swift progress in recovery and hopes to return much earlier than that.

With the infielder at the bottom of the Giants’ batting lineup, the Busan-based team was confident going into the season. The anticipation grew after the young infielder showed more maturity and composure in fielding prior to the beginning of the season. Oh started the first seven games. But just as he began to think that he had secured a starting position, the injury happened.

“I didn’t wear my shin guard as usual,” he said.

Unable to move around for a while, Oh had to have his Seoul-based parents travel to Busan to help him recover.

Due to Oh’s absence, the shortstop position for the Giants was suddenly up for grabs.

Eventually, it went to Moon Kyu-hyun, the starting shortstop for the Giants until last year. Despite his reputation of being a “defensive player,” Moon started on a hot streak. Beginning April 9, Moon recorded a .325 BA over 27 games, including multi-hits in seven occasions. But he couldn’t keep up the pace after fracturing his ribs on May 12, placing himself on the disabled list. Although he was called back up to the first team on Tuesday, it is questionable whether his batting will be as lethal as it once was.

Moon’s injury added yet another problem for the Giants in the shortstop position. As temporary measures, Kim Dae-ryuk and Lee Yeo-sang came to fill in the spots, and the two made good on the opportunity.

On May 18, Kim smacked a couple of long hits off the pitches by SK Wyverns ace Kim Kwang-hyun. Lee had three hits in a row in three games over the weekend against the Doosan Bears. Increasing Oh’s competition, Sin Bon-ki will return after finishing his military service in September. With four players as viable shortstops, Oh is more eager then ever to get back and prove his worth.

But Oh isn’t letting the stress get in the way of his healing process. He recently removed his cast, which he said was as suffocating as his inability to play his sport.

“My bone is almost healed,” Oh said. “My physicians also told me that it’s better to start moving around a little bit. I start the rehab process under the watch of the club’s trainer, beginning with upper body training. More than anything else, I want to be close to the field.”

And he’s tenacious as ever.

“I had chances to be in the field but still, it’s far-fetched to say that I’ve guaranteed my position as the starter,” according to Oh. “Honestly, I wanted to secure my spot before Sin returned from the military service. Since I got hurt, I’ve grown anxious watching others playing so well in my stead.

“But at the moment, I have to do what I can do,” Oh added. “I start from the bottom and I have faith in myself that I can come out of all this better than before.”

Oh can count on the support of his teammates, some of whom have been going into recent games with Oh’s number on their hats. Kim Moon-ho, who has become one of the team’s key batters, took him out for dinner.

For his part, Oh just says he wants to make his team proud.

“I hope to bolster the team in the second half of the season,” said Oh.