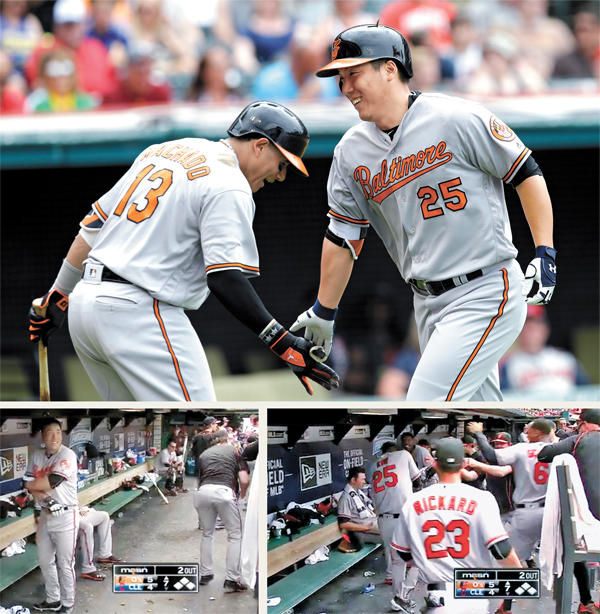 Top: Baltimore Orioles’ Kim Hyun-soo, right, celebrates his solo homer on Monday with his teammate Manny Machado during a MLB game against Cleveland Indians. Monday’s go-ahead home run was Kim’s first Major League career dinger. The Orioles defeated the Indians 6-4 thanks to Kim’s effort.Left: Kim takes off his protective gear in the Orioles dugout after rounding the bases. After his first home run on Monday, Kim was initially ignored by his teammates, part of the Major League tradition of giving a player the silent treatment after his first career home run but later congratulating him all at once when he least expects it. [AP/NEWSIS]

Baltimore Orioles’ Kim Hyun-soo smashed the first homer of his Major League Baseball (MLB) career on Monday to send the Orioles to victory.

During the away game against the Cleveland Indians on Monday at Progressive Field in Cleveland, the Korean outfielder smacked the 92-mile-per-hour two-seam fastball by Indians pitcher Jeff Manship at the top of the seventh to clear the fence with a tie-breaker. Kim’s go-ahead home run came with an even count. Kim was in a tight situation as the Orioles were already at two outs with Ryan Flaherty and Adam Jones grounding out before Kim in the inning.

Kim’s solo homer put the Orioles ahead of the Indians for good. The team eventually came out with a 6-4 win after Orioles outfielder Nolan Reimold added an insurance dinger on the top of ninth to extend the lead by two runs.

“I was really excited to have my first home run make a contribution to a team win,” said Kim through a translator according to the MLB.com. “I would have still been happy if the home run came in a situation that didn’t decide the win or loss. But because it helped the team win, it really made me happy.”

After his home run, his teammates gave him the silent treatment at first, with no one acknowledging the homer until Kim was settled back in the dugout. But as soon as he sat down, everyone congratulated him at once - an MLB tradition for when a player hits the first home run of his career, according to the MASNsports.com.

Monday’s game is Kim’s fifth straight start for the Orioles on the field. As of Monday, Kim has been batting .383 on average, or 18-for-47, with one home run and three runs batted in.

The 28-year-old Korean slugger joined the Orioles out of the Korea Baseball Organization’s (KBO) Doosan Bears after a storied, decade-long career, which culminated last year in the Bears’ victory in the Korean Series. The Orioles’ expectations for Kim were significant, as the team granted him a $7 million deal for two years before this season started. But Kim came to be seen in a negative light after a miserable spring camp in March.

After the disappointing exhibition games, Orioles general manager Dan Duquette and manager Buck Showalter decided to exclude Kim from the 25-man roster to begin the season and relegate the outfielder to the minor league. But despite the pressure from the coaching staff and local media to demote Kim, he was steadfast and exercised his right to refuse the demotion to remain in the big league.

Kim’s insistence to stay on was a thorn in the side of Showalter and rest of the staff. Although their initial intention was to start Kim, the Orioles coaching staff chose Joey Rickard, who joined the Orioles through Rule 5 draft out of minor league, in his stead.

Rickard, who was not considered a contender for a spot on the roster before, has emerged as a clear favorite for Kim’s spot after leading the team with a .390 BA while going 23-for-59.

But Rickard’s performance after the season started was less than impressive. The 25-year-old outfielder from Nevada has hit .247 this season, with only 43 hits during 174 at-bats.

Exploiting all the chances he could get, Kim went 7-for-18 in his five straight starts.