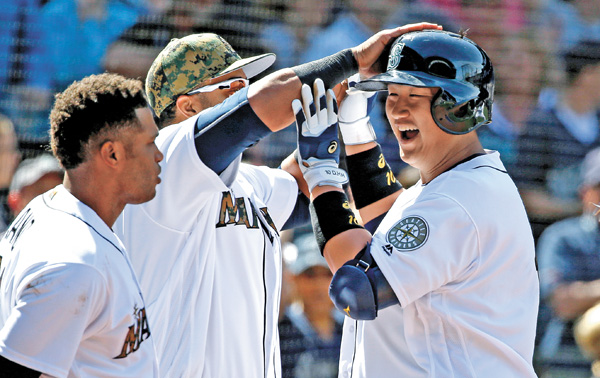 Lee Dae-ho of the Seattle Mariners, right, is greeted by his teammates after hitting a three-run home run on Tuesday in the eighth inning against San Diego Padres at the Safeco Field in Seattle, Washington. Lee’s play boosted the Mariners to defeat the Padres 9-3. Tuesday’s homer is Lee’s seventh in the Major League this season. [AP/NEWSIS]

Seattle Mariners’ first baseman Lee Dae-ho blasted a three-run homer in the five-run eighth inning to lift his team over the San Diego Padres on Tuesday, ending the Mariners’ three-game losing streak by crushing the Padres 9-3.

On a sunny day at Safeco Field in downtown Seattle, the Mariners played the first game of a three-game series against San Diego’s team. Coming out of three losses against Park Byung-ho’s Minnesota Twins over the weekend, the Mariners were in dire need of a win. Although the Mariners were determined to give the 30,000 fans at the stadium a victory, the team struggled to put points on the scoreboard during the first five innings of the game. The Padres, on the other hand, scored a run in the top of the second when the Padres’ Christian Bethancourt singled on a line drive to the center field and brought Melvin Upton home.

The Padres scored another run in the top of the sixth, but this time, the Mariners were not going to let them finish the inning with the upper hand. After scoring two points with a double and a single by Seth Smith and Nelson Cruz, Seattle’s Kyle Seager blasted a two-run homer off Andrew Cashner’s 85-mile-per-hour changeup. Aggregating four runs in the sixth inning, the Mariners went ahead of the Padres 4-2.

Then came the eighth inning, where Lee belted his seventh home run of the season to guarantee the win for the Mariners. In the bottom of the eighth with Seager and Adam Lind on first and third base, the Korean belted the 97-mile-per-hour four-seam fastball by Padres’ reliever Brandon Maurer to the left fence of the Safeco Field.

This was Lee’s first homer since May 21 against the Cincinnati Reds and also his fifth dinger in May. Although Lee has been platooning with Lind on the first base, he’s been seeing more playing time on the field after steadily putting out a solid showing whenever given a chance. His last big moment in the Majors was in April when he smacked a walk-off home run to snap the Mariners’ five-game skid over the Texas Rangers.

His fielding on Tuesday was brilliant as well. In the top of sixth with no outs, Lee caught a ground ball by Melvin Upton, tossed it to shortstop Shawn O’Malley and received the ball back from O’Malley to put out a double play.

“[Lee] does something every game,” Scott Servais, the Mariners’ manager, was quoted saying, according to CBSSports.com. “It’s amazing.”

As of Tuesday, the 33-year-old slugger from Korea had gone 20-for-75 with seven home runs and 16 runs batted in.