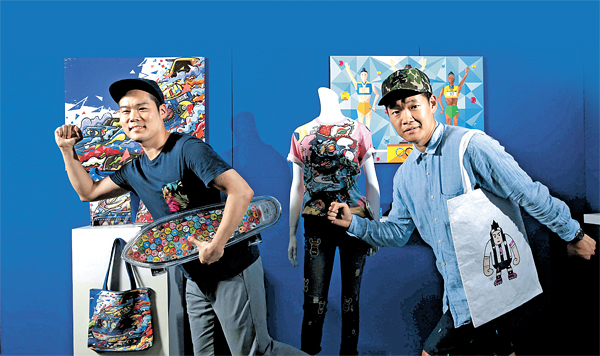 Designers Lee Jae-sung, left, and Choi Ho-geun hope for a more successful future for the industry that incorporates design into sports gear. Their products are currently on display at a sports art exhibition at the Korea Trade-Investment Promotion Agency in Seocho District, southern Seoul. [JOONGANG ILBO]

Ahead of this year’s Summer Olympic Games in Rio de Janeiro, there is increasing interest in Korea in sportswear design.

Going beyond just learning how to play sports and enjoy them, many artists are stepping up with another way of interacting with fans: by creating unique and chic sports gear.

These designers who add artistic touches to sports gear that athletes or sports fans use every day are being featured in an exhibition currently ongoing at the headquarters of the Korea Trade-Investment Promotion Agency in Seocho District, southern Seoul.

To create the “Sports Art Exhibition,” which aims to incorporate sports, arts and local businesses, 17 local companies that manufacture a variety of sports gear participated, along with 11 designers.

Products displayed at the local exhibition will also be brought to Rio de Janeiro in July during the Olympics so that Korean designers can show off their creative ideas at the global event.

A water bottle that bears images of cartoon characters that are reminiscent of Korea’s national football players, a helmet and sports shoes that have designs inspired by the English alphabet, and various t-shirts adorned with colorful hues and graphics capture the eyes. One t-shirt has an image of a referee giving a red card to a player, but on the red card is a heart.

To make Korea’s own sports brands better known worldwide like Nike and Adidas, many Korean designers are introducing their own touches to not only clothing but also skateboards and other items. This industry has been developing as fans don’t just want to watch games but get out there themselves and try the activities. And naturally, as they learn new sports, they also become new consumers of sports clothing, shoes, accessories and gear.

Although more laymen enjoy professional-level sports, it is still tough for local companies to make their products unique and eye-catching enough to compete with globally renowned sports labels.

The JoongAng Sunday met with artists who have passion for sports and a desire to make inspirational sports gear to learn how Korean sports brands will be shaped in the future and which direction the overall industry will take. 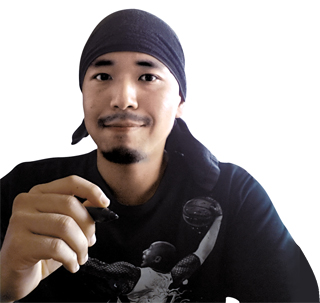 Kim Min-seok, who is known by the name Gwang Jakga, is a basketball fanatic. Kim, who studied visual design at Hanyang University, developed his passion for basketball by creating designs for basketball clothing. These days, he focuses on using English calligraphy to develop his creative ideas in order to put more emphasis on visual effects.

He says locals have not been looking to local sports brands when buying gear because the sports products industry here lacks design elements.

“The sportswear and outdoor markets in Korea aren’t small, but they have focused only on the function of products such as making products light and air permeable,” said Kim, adding that in the early and mid-1980s, basketball shoes made by the Korean company Prospecs competed with products from Nike.

He went on and said from some time in the past, people started to think that Nike products are “chic,” while Prospecs were “outdated,” and the market for local sports shoes rapidly shrunk.

“[Korean companies] were KOed in the fight to make the design and image for the brand,” he said.

Kim said that designers these days don’t really take on challenges anymore, when they should be the ones coming up with bold ideas and not-yet-presented designs.

“Those who make products for local brands make products that are similar to those made by Nike and Adidas or something mundanely acceptable [to local consumers],” Kim said, adding that such a strategy can never allow them to catch up with or go beyond the well-known global brands.

However, he also acknowledges the dilemma many local companies currently face. Since they are relatively smaller in size, if they fail after taking a big risk, they might not be able to get their businesses back on their feet.

“There are only limited ways one company can go with advanced functions, so now the competition is open with who makes better designs and who brings out better content,” Kim noted.

Another artist, Choi Ho-geun, who’s been making clothing for soccer players, says local the sports market has been running within a vicious circle because fans also don’t see why they should open their wallets to buy the sports gear that their favorite players wear.

“In the United States or countries in Europe, where the history of sports go way back and has very strong and sturdy fan base, and they are more than happy to spend money to buy uniforms or souvenirs for the teams they cheer for,” said Choi.

“However, there are still many Koreans who think there’s no need to buy such items because they should be given out for free. Naturally, sports clubs don’t invest much to make quality merchandise and then again fans and others don’t want to buy products due to the bad quality.” 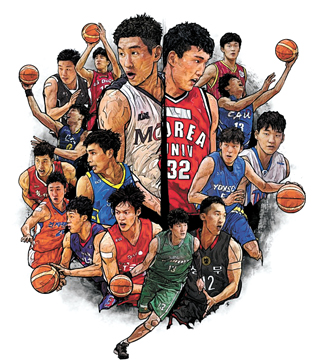 Choi, who studied design at Incheon University, started to make his own soccer uniforms after collecting them for years.

He is in charge of making merchandise for the football club Seongnam FC, dealing with not only souvenirs for fans but also posters hung at the football stadiums and the design of the tickets. Such a move has made fans become more proud of wearing the club’s gear and even caught the eyes of newcomers to the games.

Jang Bu-da, a 47-year-old designer who has been considered as one of the first designers to work on sports gear, said the lack of demand has taken away opportunities for many aspiring sports designers. Jang made the emblem for the “Red Devils,” a group of fans who cheered for the Korean national soccer team during the 2002 Korea-Japan World Cup. He also made other logos for other soccer teams in Korea, but many other sports designers are still struggling to just survive by working two or three jobs at the same time. Jang usually encourages them to hold out a little longer because the market has a future and they are the ones cultivating the currently barren land.

Jang said sports designers need to gather together and make a representative group instead of going it alone. He said if there were such an association, the group could also apply to receive subsidies from government organizations, such as the Ministry of Culture, Sports, and Tourism.

“Considering the small size of local sports companies, the Culture Ministry should step up to run a sort of ‘incubating’ system and help local sports clubs to sponsor designers for making their own gear and products.”

“This move will give designers a stable source of income while the sports clubs get to realize that making quality gear and souvenirs can be a way for them to make money as well.”

The Culture Ministry also agrees on the point that the government may be able to support the new industry if there’s more consistent demand.

“If sports designers gather to establish some credibility, the ministry can show support and be a bridge to connect them to manufacturing companies,” said Kim Yong-seob, manager at the Culture Ministry’s sports industry department.

Kim said the budget for the department surpasses 100 billion won ($83.9 million) and this year, and about 14 billion won has been assigned to promote more research and development.

“We are currently running three incubating projects for new businesses, and we need to expand the parameters and also get more funding [so that we can provide more support,]” said the manager.

The last hurdle for designers to conquer is making the overall project more appealing to companies that make the products. Baek Seung-nam of Dive in Football, which makes gear for soccer players, said that not all creative designs can be made into actual products due to costs.

“Artists come up with excellent designs with their own flashy ideas, but not all of them can be commercialized because a little change in design will push the basic manufacturing costs higher,” said Baek, adding that unsold products would cause another problem of having too much in stock.

While there are still practical issues to deal with, Baek also sees a promising future for the industry as people are now starting to pay more attention to collaborative works involving artists.

“In the end, it has to be the sports industry that brings awareness to the importance of design elements,” said designer Choi.

“I hope we get another chance to make some amazing products together in the future very soon.”