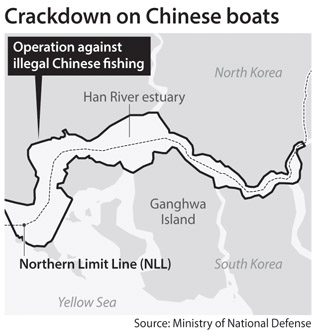 Rising numbers of illegal fishing activities in Korean territorial waters have prompted the Korean military to launch a joint crackdown operation with the UN Command Military Armistice Commission (Uncmac) on the Han River estuary, for the first time since the 1953 Korean War Armistice Agreement.

The Uncmac conducted a special investigation into the area in April and determined that the Chinese boats fishing there were trespassing in the 67-kilometer (42-mile) neutral area set by the armistice agreement.

A total of 24 personnel from the Republic of Korea (ROK) Navy, ROK Marine Corps, Korea Coast Guard and the Uncmac were organized into a “military police” unit flying UN colors on their boats, as the armistice agreement strictly forbids any proper military unit from entering the neutral inter-Korean area.

As many as 10 Chinese boats were fishing illegally in the area when agents approached, warning them to leave immediately or risk capture. The lawbreakers then fled to the North Korean side of the river.

“The Han River estuary is a sensitive zone due to the possibility of military conflict,” one military officer said. “As such, the Uncmac oversees the area as laid out in the armistice agreement.

Chinese fishermen take advantage of the fact that both Koreas are reluctant to approach the area, depleting our fisheries and aggravating international conflict. They had to be dealt with.”

The Uncmac sent a prior notification to Pyongyang on Wednesday, and Seoul also notified Beijing of the operation through the Korean and Chinese embassies.

There was no reported response from North Korea.

“Chinese interlopers are encroaching upon the livelihoods of our fishermen,” a military spokesman said. “We will continuously protect our people through future operations.”

Cross-border fishing activities by the Chinese are sparking widespread outrage among Korean fishermen. Up until 2014, only two or three activities were reported annually on the Han River estuary.

However, that number surged to 120 last year, before skyrocketing to 520 in May of this year.

An equally alarming increase has been seen along the Northern Limit Line in the Yellow Sea, where fishermen from Yeonpyeong Island seized two Chinese fishing boats on Sunday.

Another two boats were also seized by the Incheon Coast Guard on Tuesday.