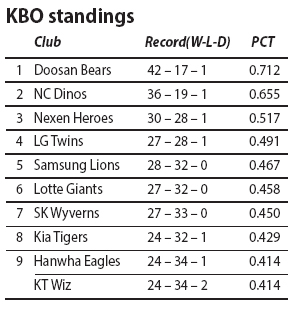 For the first time in club history, the NC Dinos have achieved 10 consecutive KBO wins on Sunday.

After defeating the SK Wyverns 11-8, the Dinos topped their previous winning record set the day before.

Dinos manager Kim Kyung-moon has never achieved the record, not even during his days with Doosan Bears. Kim achieved nine straight victories in two occasions in 2005 and 2008 with the Bears, but that was as far as they got.

Even as the manager for the Beijing Olympics team in 2008, where the Koreans earned gold and conceded no losses throughout the entire tournament, Kim only acquired nine straight wins.

In the KBO, there are 13 managers before Kim that have achieved the historic feat. The most recent was Ryu Joong-il of the Samsung Lions with 11 wins in 2014.

Another notable aspect of the Dinos’ recent run is their average score. During their 10-game run, the Dinos averaged eight runs-scored per game.

Interestingly, seven out of the 10 wins were comebacks. In five of those, the opposing team scored first. The Dinos also flipped things around to assume the lead on three occasions when it was behind by the seventh inning.

The team’s batting lineup has performed remarkably, especially during the late innings. It has marked a .354 batting average (BA) in the final three innings of the past 10 games.

The batters also blasted 19 home runs during the run, 12 of them more than two-run dingers. Their slugging percentage during the period stood at .522.

Park Sok-min, who joined the Dinos as the most expensive third baseman in KBO history, nailed five home runs, including two grand slams. He sent a go-ahead grand slam against the Wyverns on June 10 when the team was eight games into its run. In the past 10 games, Park put up 21 runs batted in and a .439 BA. As the sixth batter in the lineup, Park has been steady in bolstering the cleanup hitters including Na Sung-bum, Eric Thames and Lee Ho-joon. 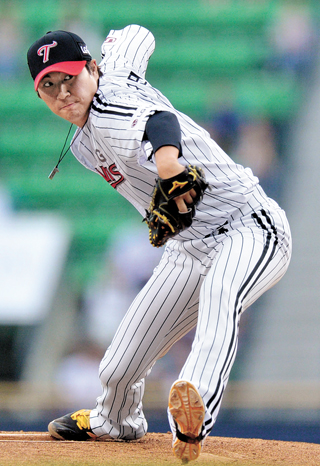 LG Twins ace pitcher Woo Kyu-min seems to be back to his old self.

The 31-year-old pitcher has been well known for his stability on the mound, grabbing double-digit wins for three straight years. Last year, Woo had a 3.42 earned run average (ERA), placing fourth in the category. He has only given out 17 base-on-balls, indicating his stable and well-balanced pitching.

He started off this year as well as before, recording a 2.91 ERA in the first four games. On April 26 against Samsung Lions, Woo grabbed his first shutout win of the season. But then came his downfall. In the three games he played in May, Woo collected an ERA of 13.50 and three losses. After his third loss against the Nexen Heroes in which he recorded 12.27 ERA and conceded two home runs, Woo was excluded from the first team roster for the first time in 682 days. Woo returned to the mound for the Twins on June 4 after taking a breather and pitched for 5 and 2/3 innings, yielding four hits and four runs. Although he came out with a win thanks to the effort by the batting lineup, the performance itself was by no means satisfactory.

However, it didn’t take long for Woo to find himself again.

In the latest game he played on June 10 against the Hanwha Eagles, Woo pitched for eight innings and ceded only one run. Although he allowed a home run, the rest of his playing was essentially flawless. His ball control and aggressive pitching mix of changeups and two-seam fastballs were especially notable.

“That was perhaps his best showing this season,” said Twins manager Yang Sang-moon.

Woo has also recaptured his confidence. “All the balls that I threw early in the season were dead balls,” Woo said. “But out of the 106 balls I threw [in the past two games], about half of them went as I wanted. I felt in control.”

The slump could’ve been just what Woo needed, allowing the right hander to work on his balance and form. Woo becomes a free agent after this season, and although that has to be on his mind, he says he’s only concentrated on playing his game.