At the Munhak stadium, it’s ‘Take me out to the Big Board’

At the Munhak stadium, it’s ‘Take me out to the Big Board’ 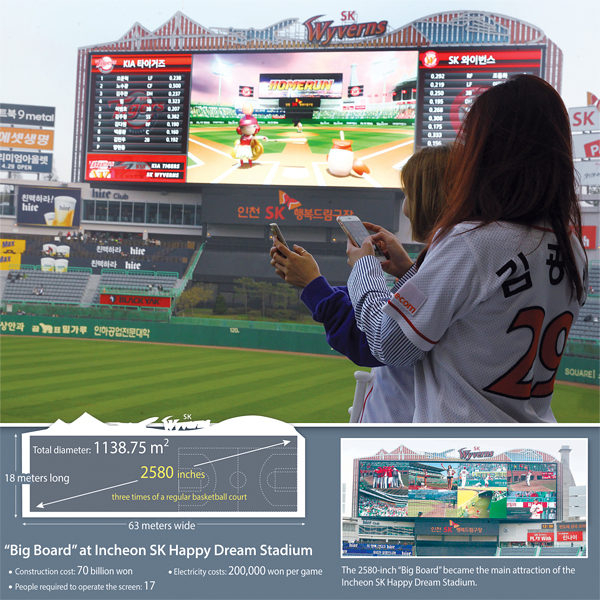 For fans of the SK Wyverns, attending a home game at Incheon SK Happy Dream Stadium, also known as Munhak Baseball Stadium, is much more than simply watching a ball game.

Now, they can enjoy a wide spectrum of entertainment through the “Big Board,” the world’s largest LED scoreboard installed this year at the ballpark.

Stepping into the home of the Korea Baseball Organization (KBO) club, the first thing that grabs attention is the giant scoreboard at the stadium’s center. Measuring 63 meters (207 feet) across and 18 meters tall, the scoreboard is the largest in the world, and even surpasses that at the Seattle Mariners’ Safeco Field, which is the largest in the Major League.

Created by Samsung Electronics, the “Big Board” is the size of three basketball courts put together.

But the 70-billion-won ($59.7 million) screen is more than just a means of showing the score. It’s also the largest smart TV in the world. Manned by 17 people, it plays different programs before the game, as well as in between innings and timeouts.

Content displayed on screen ranges from dugout interviews to games that fans can play from their seats by connecting their smartphones to the board using its “Smart Signage” technology.

That technology is perhaps what makes the screen so extraordinary and state-of-the-art. Smart Signage, which was developed by SK Telecom, enables individual users to link smart devices to the board in real time. By using the “Play With” application offered by the Wyverns, fans can not only participate in live events and polling, but they can also play games with others in the stadium through the big screen.

Essentially, the screen transcends the conventional scoreboard, which shares information in one direction, to become a multidirectional channel for fans to communicate with the team and each other.

“I was surprised to see how big the screen was,” said Hong Jae-sun, a Wyverns fan who attended a game in May. “What shocked me even more was diversity of the programs it offered. I think even those who are new to the stadium could enjoy themselves here.”

The screen has even gained international attention. This was apparent when officials from FC Porto, a reputed football club from Portugal, were spotted at the stadium during the KBO game between the Wyverns and Lotte Giants on June 8.

Visitors to the stadium that day included Fernando Gomes, the vice president of the club, and Tiago Gouveia, the club’s marketing director.

The purpose of the visit was simple: to check out the “Big Board.”

“We explained to FC Porto officials that the scoreboard was installed to maximize fans’ interest and provide them with something they have never seen before,” said a representative of the Wyverns. “We also emphasized how it lets us up the production and provision of different types of contents for fans, which would ultimately bolster the value of the club. FC Porto officials expressed their interest and asked us many questions. They were especially intrigued by how the board allows swift communication with fans via mobile technology.”

This weekend, the Wyverns will offer yet another new experience for Korean fans. On June 18, the Munhak Baseball Stadium will feature an event titled “Musical at the Ballpark,” in which a musical titled “1789: Les Amants de la Bastille” will be played on the scoreboard.

This event is similar to those offered at AT&T Park by the San Francisco Giants, such as “Pixar Day at the Park” and “Opera at the Ballpark,” where the club plays movies and stages operas for fans.

“It is one of the many festivities that fans can enjoy at the ballpark,” said a staffer from Fabulous, a production company in Korea that co-sponsors the event.

“What’s unique about the event is that attendees can actually go in to the field and lay down [on the grass] to watch the musical through the screen [like an outdoor theater],” she added.