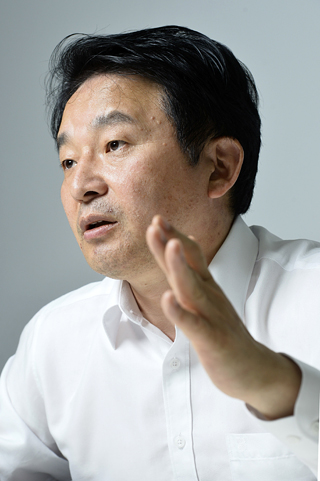 Jeju Governor Won Hee-ryong has a joint interview with the JoongAng Ilbo and the Korea JoongAng Daily in the Seoul office of the Jeju Special Self-Governing Provincial Government on Wednesday. [oh sang-min]

Jeju Governor Won Hee-ryong called for the need to break away from the current political structure and for loyalists to President Park Geun-hye to step down in order to enable a transformation of the ruling party.

Won, 52, sat for an interview with JoongAng Ilbo and the Korea JoongAng Daily on Wednesday at his office’s Seoul Branch in Yeouido, where he stressed the need to bring back voters who have been loyal to Saenuri all their lives, saying that in order to do so, the party needs to show that it has truly changed.

This comes after the ruling Saenuri Party’s humiliating defeat in the April general election, which reduced it to the second-largest party in the newly elected National Assembly.

There was a surge in independents who gained seats, including seven Saenuri members who quit the party after they were denied tickets in the race, in a selection process that was controlled by Park loyalists.

The upcoming national convention to elect the party’s new leadership is scheduled for Aug. 9. Reps. Choi Kyung-hwan, a former deputy prime minister of the economy, Lee Ju-young, Lee Jung-hyun and Hong Moon-jong are all close associates of President Park who have indicated their intention to bid for leadership.

Korea needs to break from its political structure, Won says, pointing out that he sees a small-scale political reorganization happening in the early part of next year. But he also said it may take longer for an actual full-on political realignment.

Won, who ran for his party’s presidential candidacy in 2007, has often been called Saenuri’s “hidden dragon.”

As he sat for the interview, he discussed a range of issues including the upcoming presidential elections, the headaches of the Saenuri Party, youth unemployment and his vision for a prospering Jeju.

But he did not confirm whether he plans to run for president in the future, saying he wishes to stay focused on governing Jeju for the time being.

A former prosecutor and three-term lawmaker, the Saenuri Party stalwart became governor of Jeju Special Self-Governing Province in 2014.
A native of the scenic tourist island, Won graduated from Seoul National University’s College of Law and received media attention for ranking first in the College Scholastic Ability Test and the National Judicial Exam.

Jeju Island this year celebrates its 70th anniversary of becoming a separate province.

Q. What do you think of the assertions that loyalists of President Park need to seize party hegemony to carry out the 2012 presidential election pledges and practice responsible politics?

A. The focus right now is on transformation, but why is there no discussion about transformation and only about responsibility? Will they only take responsibility and cleanly hand over the administration next year? Why is there only talk about the current administration that has already secured its term? I believe that backing the president is a good thing. But what is also important is the party’s ability to show how broad-minded and integrated it can be through the national convention and presidential primary process; and it needs to show its intensity and sincerity when it comes to making real change.

Some think that the Saenuri Party may split up, depending on the results of the national convention.

Because of the nature of the Saenuri Party, it will not be easy to split it apart. Even if it loses its majority, it nevertheless holds a tradition of going with the flow as long as it holds the prospect of seizing power. But in the case it should become certain that there is no prospect of seizing power, or if it becomes a minority party that no longer garners measurable consideration… you can imagine what being in a situation like that will be like.


Is there a need for Saenuri to separate itself from the president in order to show it is transforming?

I think that is rather petty. This has happened in ruling parties before in fact, making a fuss when you cannot line up next to a president who is particularly popular and doing well, then breaking away in the latter half of the term.


Do you think the Korean political structure will break free from its extreme conservatism and extreme liberalism?

The most complete political realignment can happen when key forces step forward to carry out reform to seize power. It is problematic that right now, when a president is elected, various alliances are formed and populist promises are made, and then for the next five years after election its faces endless attacks.

Comprehensive politics is limited because [Korean presidents serve a single five-year term with no re-election]. The main thing to keep in mind about the government and the administration is that it is a structure that can always change, and it can do this in order to enable compromise and reflect public opinion, and this is the parliamentary system.


What is Jeju’s biggest obstacle?

A key concern is the rapacious appetite for development, and subsequently, how to balance the preservation of Jeju’s natural environment with sustainable growth. Setting up such a framework is the most challenging problem. If Jeju’s environment, one that is in harmony with nature and also provides repose from the chaos and worries of daily life, were somehow to become broken, the reason for people to seek the island out will also disappear. The scenery is beautiful, but there are more beautiful places. Jeju is a place where time flows separately, languidly, with a rhythm of its own, where one can escape from the stress of daily life and receive what we might call a kind of ecological healing. We also need to consider how we might go about maintaining a natural environment such as this, an environment that can be substantively experienced… For example, we can separate its various areas into those that can be developed and those that cannot be developed, including areas within a certain distance of the shore, 200 meters (656 feet) from the sea, and these areas will be a conserved public space… Luckily, the Jeju people are also fast becoming aware that this overzealous appetite for rapid development can lead to a future in which everything they cherish could be lost.


What is your vision to promote Jeju’s tourism?

Rather than quantitative, I believe in the need to switch toward qualitative tourism. This can in turn lead to real growth in Jeju’s population and an increase in its tourism. In order to improve the quality of tourism, we need to alleviate any inconveniences tourists may experience when they come here, as well as resolving any public transportation issues. I also believe we need special content for high-quality tourism, such as food and cultural experiences.

Rather than short-term projects, we are also looking into cultural and arts programs such as an English education city. This can enable artists to reside here to create works and participate in the community in order to hatch and nurture a vibrant cultural atmosphere. Not only can people take in the scenic beauty of the island, but Jeju can become a yearlong museum and a stage for live performances, and this is an idea that has been discussed for the past two years and will be put into effect in the latter half of this year.


There is concern that Jeju suffers from a lack of manpower.

In order to support employment for the people of Jeju, I believe we need to put a certain amount of conceptual weight on promoting the growth of talented Jeju people. We need programs to foster our Jeju talents, but we also need to draw in talented people from the rest of the nation. For example, in the case of the Jeju Province Development Co., 171 new hires were picked, and they all underwent three stages of interviews by different outside companies. And this is the start of a new kind of hiring process, and this method cuts off hires that can happen through connections. If such ideas are built upon, eventually in the long-run innovative and competitive people will gather and enable an increase in capital on the island… and help with protecting the island for the happiness of locals and the sustainability of the land.


Do you think that UN Secretary-General Ban Ki-moon has a chance of becoming the Saenuri candidate for president?

Well, in order to become a candidate, he needs to undergo an election within the party by next summer. Right now, Secretary General Ban looks to be strong, but the moment you enter the presidential election stage, it becomes a battleground. Ban is a figure that has been included in the personnel list of all previous administrations, and a difficult and harsh tunnel awaits.


Will you run for president?

My term for Jeju governor runs until 2018, so will the Jeju people allow that? If I were to run for president, my views and the thoughts of the people need to match like two hands clapping. First, I believe I need to be faithful to the 650,000 Jeju residents who entrusted me as their governor.