Parents who lost kids fight on

Parents who lost kids fight on 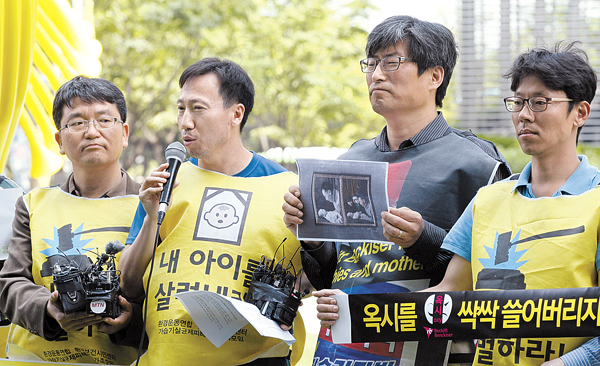 
Firefighter Kim Duk-jong, who saves lives for a living, can hardly bear that he couldn’t save his son Seung-joon from the toxic sterilizer used in the humidifier in the family’s home.

“I have fought fire and flames all my life, soot and smoke this close to my face,” he says. “But a mere vapor - invisible and scentless - took my son away from me.”

In 2011, Kim discovered the cause of his 4-year old son’s death two years earlier.

That was the year the Korea Centers for Disease Control and Prevention linked the sterilizers to a mysterious series of deaths from pulmonary fibrosis.

Since then, Kim spends his free time picketing in public to force awareness of the tragedy on more people.

He goes wherever he is needed. Last month, Kim flew to the outskirts of London with a civic group and victims and victims’ relatives.

They wanted an apology from the headquarters of Oxy Reckitt Benckiser, a British-controlled company whose Oxy-brand sterilizer harmed the most number of people in Korea because it was the market leader.

“I will never be able to forgive myself,” he says, “but when I look into the eyes of my kids, and the kids that I save from fires every day, I can’t back out of our campaign for some kind of justice.”

Kim is but one of the parents who lost children to humidifier sterilizers who are calling for stricter chemical controls and more responsible government regulation to save innocent lives from being lost.

According to Park Dong-uk, a professor of environmental health at Korea National Open University, at least 63 children were killed by the products.

Choi Jee-yeon opened a day care center in Incheon two years after she lost her daughter Seo-in in 2008.

“I want to do what is best for my Seo-in,” she says. “She’d like me to take care of other kids as if they are my own.”

In 2007, Seo-in was born a few pounds heavier than other kids. She caught a cold at six months. The doctor recommended using a humidifier. Choi wanted the best for her baby and added sterilizer in its water to make sure it wasn’t moldy.

Within six months, Seo-in was dead.

“I want to give all kids a better, safer world,” Choi says. “And I’ll spend the rest of my life doing that.”

For some parents, the fight won’t be over until all dangerous chemicals are identified by the state.

“Humidifier sterilizers were once advertised as 99.9 percent safe,” says Park Ji-sook, whose daughter, now 8 years old, lost 80 percent of her lung capacity. “Now I can’t trust anyone. Who knows what’s in the wet wipes or air fresheners?”

The toxic compound used in the Oxy-brand sterilizer, PHMG (polyhexamethylene guanidine), has long been considered safe for use in shampoos, wet wipes and air fresheners.

Oxy Reckitt Benckiser started using PHMG in its sterilizer in 2000, after consumers complained that another chemical, Preventol R80, created suspended materials inside humidifiers when mixed with water. PHMG was the replacement.

PHMG in Oxy-brand sterilizer killed at least 73 people, according to prosecutors.

Recent studies suggest that PHMG may even be a type of carcinogen.

“Once PHMG enters a body, it can work its way into the genes and create cancer,” says Paek Do-myung, a professor at Seoul National University’s Graduate School of Public Health, who announced new findings at a seminar on Friday.

Until 2011, the Ministry of Trade, Industry and Energy had categorized humidifier sterilizers a voluntary-safety-management product, meaning their safety was regulated by the market rather than the government.

In a scramble after the humidifier sterilizer scandal, the Ministry of Environment conducted a state-led investigation from last July into hundreds of air fresheners, odor-reducing sprays and other cleaning agents, and recalled last month seven products containing PHMG and other toxic chemicals.

Parents and victims who lost loved ones continue their fight with civil lawsuits.

Lee Jung-hwa, 39, filed a civil lawsuit against Oxy Reckitt Benckiser in 2011. She says she almost gave up when law firm Kim & Jang submitted a report to the court that said “fine dust particles may be the cause of the pulmonary illnesses.”

Lee used humidifier sterilizer from 2009 when she was pregnant with her first child. After 2011, her lungs collapsed and she received a lung transplant.

“After my sickness, I was afraid of going to crowded places, like amusement parks,” she says. “Then I found other victims and parents like me, and we are not afraid to hold one-man demonstrations out on the streets.

“It’s what we can do for loved ones who have gone ahead of us,” she says. “We do it for ourselves, too.”