Ahead of the Olympics, Shin buckles down

Ahead of the Olympics, Shin buckles down 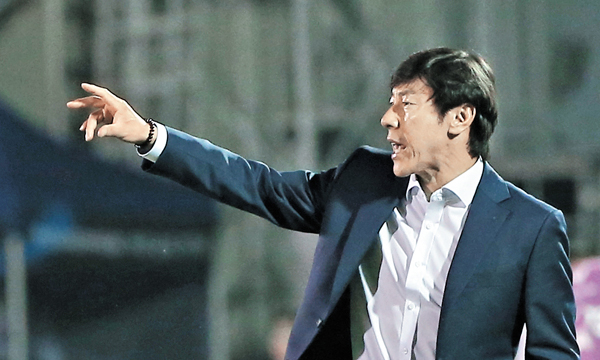 Olympic men’s football team skipper Shin Tae-yong is to announce the final roster for the Olympics team today, which will include the last of the wild cards. [NEWSIS]

Olympic football team manager Shin Tae-yong learned his lesson and is resolute about not repeating the same mistake this summer.

“I will not make the mistake I made against Japan,” said Shin during his interview with the JoongAng Ilbo, referring to his team’s devastating 2-3 loss to Japan in January. In the final match of the 2016 AFC U-23 Championship, Korea succumbed to the Japanese side despite taking an early 2-0 lead. That all had to do with the team’s defense crumbling in the second half.

“My central defender lost his composure when pressured by the Japanese side,” recollected Shin. “I wanted to substitute him out but he told me he wanted to play until the end. I got a little bit sentimental and I left him out in the pitch and that cost us three goals. It taught me that a manager should not be swayed by emotions or empathy.”

Shin obviously learned his lesson in a hard way, losing the AFC Championship title to archrival Japan, but it is because of this bitter loss that Shin has become more objective in selecting his players for the upcoming tournament, excluding any defenders who struggled during the championships.

The men’s Olympics football team has been assigned to Group C along with Mexico, Germany and Fiji. Given the grouping, it will not be smooth sailing for Shin and the squad to go past the group stage.

“If Fiji loses all its three games and the rest of the teams collect two wins and one loss, one of them can be knocked out of the group stage even with a winning record,” said Shin. “Ours is a difficult group. We have to channel all our attention on the second game against Germany on August 8.”

Slated to announce the final roster for the Olympics squad today, Shin has picked midfielder Son Heung-min of Tottenham Hotspur in the English Premier League and defender Jang Hyun-soo of Guangzhou R&F in the Chinese Super League as his wild cards for the team.

“Tottenham has told me they will send Son for the Olympics after the team’s friendlies against Juventus F.C. on July 26 and Atletico Madrid on July 29,” Shin said. “Even if Son arrives in Brazil on July 31, one week would be enough for him to recover. I know he’s been struggling but I am not worried. I will put him on the right flank.”

“Jang will join after the league match on July 23,” Shin added. “For the remaining wild card, I am considering Suk Hyun-jun. Hwang Ui-jo of Seongnam FC is another option.” Suk is a striker from Portugal’s elite team FC Porto, who netted a winning goal against the Czech Republic for the senior national team during an international friendly on June 6.

During the 2012 London Olympics, the roster was stacked with names such as Ki Sung-yueng of Swansea City and Koo Ja-cheol of FC Augsburg, not to mention Park Chu-young, one of the most celebrated strikers in Korea, as the wild cards. By comparison, the Olympics team right now has been criticized as possibly the worst squad Korea has ever sent to the Games. But Shin begs to differ. “We’ve lost only twice,” refuted Shin. “Why do they say our defense is weak?”

Since Shin took the helm in March 2015, the team has had 15 wins, eight draws and two losses in 25 international matches. The team tied with France and Denmark and crushed Algeria on two occasions, with scores of 2-0 and 3-0 in March this year.

After the senior team’s friendlies early this month, Shin discussed lessons they could take away from their seniors’ loss and win.

At the end of the day, for Shin and his players, how they should approach the matches this summer is based on mutual trust and confidence.

When asked what would happen if the team plays Japan in the Olympics, Shin said, “they will not get away.”