Chinese money is spreading like wildfire in football worldwide. Not only is it buying out star players and elite clubs around the world, but Chinese capital is bringing in renowned managers from other leagues into the country as well, including the K-League.

With the Chinese Football Association revealing its ambition to become a global football titan with a detailed report early this year, China’s effort, fully supported by President Xi Jinping himself, has been expedited with a huge financial investment.

Recently announced by the Asian Football Confederation (AFC), 16 clubs from the Chinese Super League spent nearly $300 million over the winter transfer window. The cash China spent even surpassed the expenditure of the big leagues in Europe, including the English Premier League (EPL), which spent about $272 million.

The Chinese rush to scoop up K-League Classic’s star players began a few years ago. 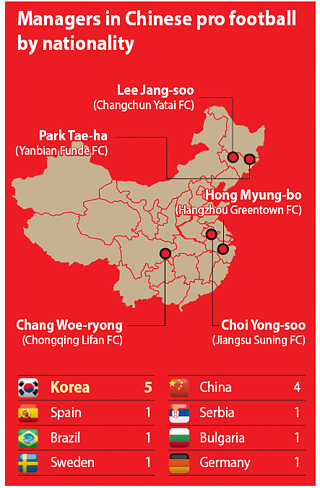 Most recently, Kim Kee-hee, starting defensive midfielder for the Korean national team, joined a Chinese Super League club early this year with a $6 million paycheck. The deal was one of the biggest transfers in Korean football history.

But it wasn’t only the K-League players wooed by Chinese money. Some K-League managers also are the targets of China.

Choi is now the fifth Korean manager taking the helm of a Chinese club. It all started with Park Tae-ha, who overtook the managerial post for Yanbian Funde FC in December 2014 after serving under Choi in FC Seoul as a coach.

Choi was initially approached by Jiangsu last year, but he rejected the offer citing loyalty for FC Seoul. However, it took less than a year for Jiangsu to change Choi’s mind. Although it is unclear as to how much Choi is to receive, it is estimated that his salary could be as much as 3.5 billion won ($3 million).

It’s not only the Korean league that is losing players and managers left and right.

As recently as last year, Brazilian league lost one of its legendary managers, Luiz Felipe Scolari, to a Chinese club. Scolari, who now manages Guangzhou Evergrande, is well known even to older Korean football fans as the skipper that led Brazil national team to top the World Cup in 2002 in Korea.

He has a decorated managerial career, which started in 1982. For more than two decades, he oversaw teams such as the Portuguese national team, the Brazilian national team and Chelsea of EPL.

Sven-Goran Eriksson, a Swedish manager who was at the helm of the English national team as well as elite EPL teams such as Manchester City, is also supervising a Chinese club. Eriksson managed Guangzhou R&F in 2013 and joined Shanghai SIPG in 2014.

Eriksson is also a legend, especially among the Brits. Under his watch, the British team improved its FIFA World Ranking from 17th in 2001 to fifth place by the time he resigned.

Scolari and Eriksson are only few of the world-class managers that can be spotted during Chinese Super League games. There is also German manager Felix Magath who managed elite European clubs such as Fulham and Bayern Munich before taking over Shandong Luneng this year.

These recent events are a lot more than meets the eye for the K-League as a whole. Although some say Chinese money flooding in the K-League good news for otherwise financially troubled K-League clubs, critics are concerned that the K-League is losing its competitive edge, possibly its popularity, as its star players and managers are playing less in the local league.