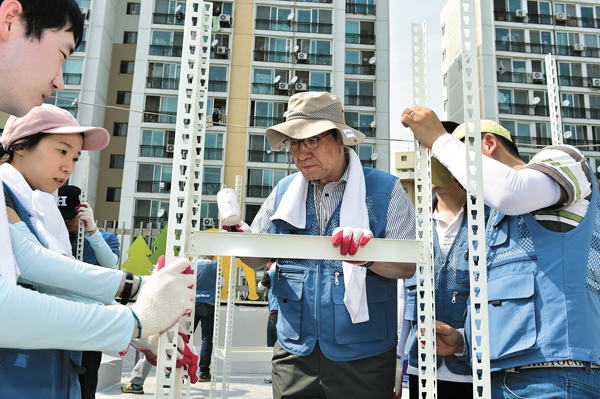 In celebration of the “2016 Posco Global Volunteer Week,” CEO Kwon Oh-joon and 50 executives and staff members from Posco Group visited the Hasang Rehabilitation Center to build iron furniture and construct a “Steel Garden” rest area on May 31. [POSCO GROUP]

Korea’s leading steelmaker Posco Group declared May 28 to June 3 as the “2016 Posco Global Volunteer Week,” during which the company promoted diverse kinds of volunteer work under the slogan “Mature Giving.” (In the Korean language, “mature” and “steel” are homophones.)

Volunteers from Posco Group located all over the world donated their time and expertise to their regions as part of the event, which is one of the company’s major social contribution activities.

Since 2010, Posco Group has been holding its Global Volunteer Week every year one day before or after May 29, which is the date when Posco’s volunteer organization was founded.

During the week this year, executives and staff members of Posco Group completed volunteer projects like planting flowers, replacing batteries in the wheelchairs of the disabled, making safe traffic environments for children and doing costly, complicated electrical work in the homes of elderly who live alone.

The company also ran volunteer projects overseas in 52 countries including China, Japan, Vietnam, Indonesia and Mexico - all places where Posco Group has been expanding its presence. These projects range from handing out daily necessities and repainting rusting bridges to installing bathrooms in welfare centers.

While Posco Group has been running various volunteer projects both in Korea and abroad to celebrate Posco Global Volunteer Week, the group’s CEO, Kwon Oh-joon, gave a helping hand to a rehabilitation facility located near its headquarters.

On May 31, Kwon was accompanied by 50 executives and staff members on a visit to Hasang Rehabilitation Center, where they built furniture like desks and bookshelves, as well as a “Steel Garden” - a rest area for disabled people and their families.

Besides his participation in the volunteer project, Kwon also visited the Pohang Center for Creative Economy & Innovation on June 15 to hold a meeting with CEOs of existing start-ups and those who are thinking of creating their own.

During the meeting, Kwon listened attentively while the participants discussed how things had gone thus far and their plans for the future.

Kwon encouraged the participants to use their creativity to turn their businesses into successes.