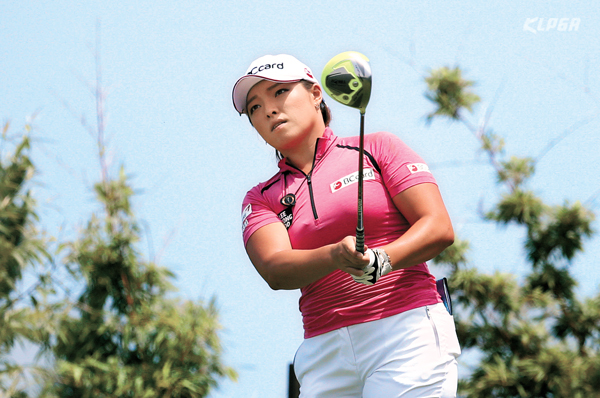 Korea’s Jang Ha-na watches her tee shot during the KLPGA’s Kumho Tire Ladies Open at Weihai, Shandong, China, on Saturday. After her mid-season absence mainly because of poor health, Jang entered the event as a tune-up for the U.S. Women’s Open this weekend. [NEWSIS]

When will Jang Ha-na return to her old self?

She notched a fourth-place finish at the Korea LPGA’s Kumho Tire Ladies Open at Weihai, Shandong, China, on Sunday, despite leading through the first two rounds of the three-day tournament.

The slump that she has been in since she won the LPGA HSBC Women’s Championship in early March continues.

Now in her second year on the LPGA tour, Jang has been largely absent there for several months, and her appearance in Weihai was her second at a KLPGA event during that time. She did not compete for nearly two months after withdrawing from the Swinging Skirts LPGA Classic in April, citing poor health. She entered the KPMG Women’s PGA Championship on June 10-13, but finished 30th at 7 over par. 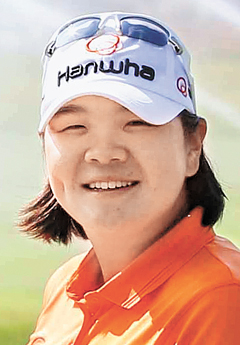 Her performance on the last day of the Kumho Tire Ladies Open was disastrous. As a leading golfer on the U.S. tour with a rare hole in one on the par 4 eighth hole at the Pure Silk-Bahamas LPGA Classic, she was the odds-on favorite to win the Kumho Tires Ladies Open.

And she finished the second round on Saturday in the lead, one stroke ahead of Korea’s Bae Seon-woo and China’s Feng Shanshan. Although she had one double bogey on Saturday at the par-4 seventh, she more than made up for that mistake by grabbing seven birdies.

That all went haywire on Sunday as she struggled on the course with fatigue and foot pain and failed to nail the shots that she would have easily made earlier in the season. Her woes culminated on the 17th, where she came up inches short on her birdie putt. Jang had six bogeys on Sunday with only one birdie. She finished the closing round at 5-over for an aggregate 7-under-par 209 for the event.

Jang’s physical problems are probably due at least in part to stress brought on by several incidents that put her in a bad light. One, for example, occurred at Singapore’s airport, where Jang’s father dropped his bag and injured another Korean golfer, Chun In-gee, who had to withdraw from several subsequent tournaments. Jang won the Singapore event, the HSBC Women’s Champions.

Jang has reportedly been suffering from insomnia, blurred vision and dizziness since then, which put a damper on her second season on the U.S.-based tour.

These latest setbacks are a bad sign for Jang as she prepares for the U.S. Women’s Open next week, another LPGA major, at San Martin, California. As of Sunday, Jang was ranked 10th in the world, fifth among Koreans, according to the Rolex Rankings. The top four golfers in the rankings qualify for the national golf team to play in the Rio Olympics this summer.

While Jang struggled on Sunday, Korea’s Lee Min-young rose steadily on the leaderboard after finishing fourth on Saturday to grab her first KLPGA title in two years. Her aggressive approach in the final day helped her take the victory. Her charge included a decision to fly several bunkers on the 14th hole to hit the green, and she succeeded. She was coming off a bogey on the 13th. She finished the tournament at 13-under 203, matching the 2014 winning score at the tournament of Kim Hyo-joo.

China’s Feng, who was the runner-up in the event last year as well, shot 12-under for second place.