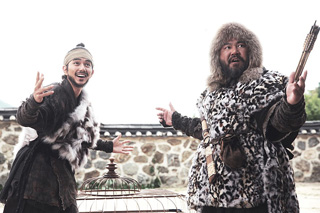 Seondal: The Man who Sells the River (12)

Kim Seon-dal (Yoo Seung-ho), is a genius con man waiting for the score of a lifetime.

He’s part of a harmonious team that includes Bo-won (Go Chang-seok), who is an expert at disguise; Yoon (La Mi-ran), who specializes in a fortune-telling scam; and Gyun-yi (Xiumin), who dreams of becoming the next Kim Seon-dal.

Kim and his teammates are planning a risky scam involving tobacco. But behind the scenes, there is the powerful Seong Dae-ryeon (Cho Jae-hyun) who could ruin it all. Still, high risk, high reward - the group vows to do everything they can to succeed.

The film is based on the famous Korean folklore character Kim Seon-dal, who reportedly sold water from the Daedong River in now North Korea. The character was created late in the Joseon Dynasty (1392-1910), and his story is one of failed ambition that leads to trouble.

The film is Yoo’s second lead role after completing his military service in 2014. He most recently played Hwan-hui in “The Magician” (2015).

Xiumin, a member of the K-pop boy group Exo, makes his acting debut in the film.

It’s a mountain that nobody should climb. Located in a remote part of the country, it was home to a coal mine that violently collapsed. There are rumors that it’s haunted by a mysterious presence, and that those who go there have 16 hours to leave before they’re never seen again.

But there are also rumors that gold can be found there, so Dong-geun, played by Cho Jin-woong, brings a gang of prospectors to strike it rich.

At the same time, it turns out that the sole survivor of the mine collapse, Ki-seong (played by Ahn Sung-ki), saw something that must not be seen. Now, they all must try to escape.

The film focuses on each of the characters’ conflicting desires as they try to flee the labyrinthine mountain.

The location seems familiar at first, but it quickly becomes dark and twisted as the possibility of an exit becomes less and less likely.

Ahn is an acclaimed veteran actor who starred in “Nowhere to Hide” (1999) and “Silmido” (2003). Cho recently has played Uncle Kouzuki in “The Handmaiden.” 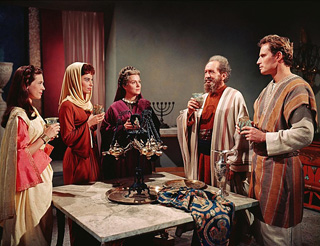 This masterpiece from 1959 is being re-released following a digital remastering.

It’s the year 26, and Judah Ben-Hur (Charlton Heston) is a wealthy nobleman living in Jerusalem. But due to a betrayal by childhood friend Messala (Stephen Boyd), Ben-Hur is forced into slavery. He embarks on a journey to get revenge against Messala, and while he eventually restores his status, he is ultimately saved by his religious faith.

It is an epic historical drama directed by William Wyler, which is based on the novel, “Ben-Hur: A Tale of the Christ” written by Lew Wallace in 1880. It took over 10 years to produce the film along with a cast of over 100,000. The most well-known scene - involving a chariot race - took over four months to complete.

The film was nominated for 12 Academy Awards in 1960, winning an unprecedented 11. That record has never been broken, though it has been tied by “Titanic” (1997) and “The Return of the King” (2003), the final installment of “The Lord of the Rings.”

A complete re-make of Ben-Hur will be released in the United States in August.

In this follow-up to “Finding Nemo” (2003), the fish Dory goes off to find her own family with Nemo and Marlin.

Dory befriended Marlin when they went on their first adventure, and all are now back in their hometown. But one day, Dory, who has memory problems, suddenly remembers something about her parents. She embarks on a reckless journey with her friends to find them.

After finishing “Finding Nemo,” director Andrew Stanton couldn’t get the character of Dory off his mind. He felt worried for her, unsure if she’d get lost again or be parted from her friends.

Eventually, his worries led him to a question: How did Dory get separated from her parents in the first place?

The adventure isn’t easy for Dory, particularly with her memory problems, but her friends are always at her side to help her through.

Loneliness, friendship and family are the key words for the moviegoers to think and feel while they watch it on screen. It will make them laugh and cry at the same time. 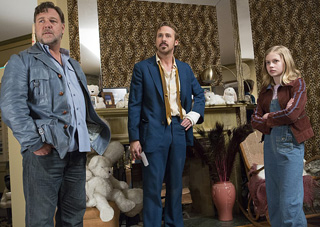 Two crooked men collaborate to set things straight. “The Nice Guys” is set in 1977 Los Angeles, where everyone is involved in some kind of scandal to make a quick buck.

Holland March, played by Ryan Gosling, thinks of himself as a detective, but most see him as a con man through and through.

Jackson Healy, played by Russell Crowe, is a hired enforcer.

But when a woman goes missing, they are forced to cooperate to earn money, solve the case and, eventually, keep the peace.

The two play radically different characters, but their chemistry on screen is clear.

The film is another collaboration by director Shane Black and producer Joel Silver, who made their name with the “Lethal Weapon” series, “The Last Boy Scout” (1991) and “Kiss Kiss Bang Bang” (2005).

One of the film’s strongest elements is its attention to detail, which transports filmgoers back to the 1970s. 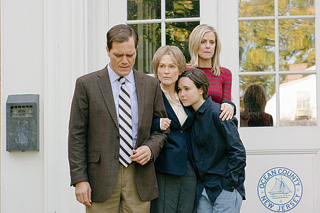 Laurel Hester, played by Julianne Moore, is a 23-year detective who dreams of becoming a lieutenant in her New Jersey department. She falls in love with Stacie Andree, played by Ellen Page, but is soon diagnosed with terminal lung cancer.

It is based on the true story of Hester (1956-2006), who fought to have her pension benefits extended to her domestic partner when she died.

The story gained huge attention, and was made into a documentary film of the same name in 2007. That film won the Academy Award for Best Short Documentary in 2008.

“Freeheld” is one of several recent films featuring relationships between women.

But this latest film is different in its more explicit focus on the fight against prejudice and for the right to love whomever you want.

It’s a personal project for Page, who herself came out as a lesbian during a conference for the Human Rights Campaign in Las Vegas in 2014.

She decided to join the project after watching the award-winning documentary.

The film is being released under the name “Laurel” in Korea.