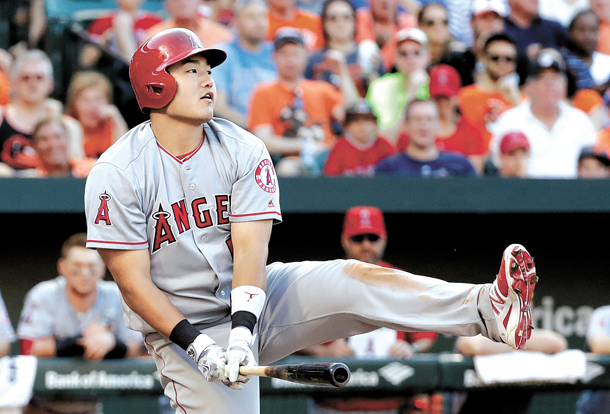 Choi Ji-man of the Los Angeles Angels reacts after striking out in the eighth inning during Sunday’s game against the Baltimore Orioles. Choi finally has returned to the big league after being relegated to the minors in May. [AP/NEWSIS]

During the Orioles’ 3-2 win, Kim went 1-for-3 with one base-on-ball (BB) for his team, while Choi, who returned to the majors after spending some time in the minors, went 0-for-2 with two BBs for the Angels.

Kim batted second while playing left field. Going to the plate at the bottom of the second, he walked to first base with four balls. He tried to reach second base during the next play but was caught while stealing the base. After grounding out during his at-bat in the third, Kim finally smashed a single in the sixth inning, driving a two-seam fastball by Angels starter Nick Tropeano to center field. His effort went in vain as three next batters were retired with flyouts.

Choi, who was included in the season opening roster of the Angels but was demoted to the minors in May, put out an impressive performance during his first game in the big league in two months, especially in fielding.

Batting sixth for the Angels, Choi was steady on first base, cutting short the Orioles’ attempt to round the base repeatedly.

In the bottom of third, when Manny Machado grounded Tropeano’s 81 mile-per-hour slider, the Angels’ shortstop Andrelton Simmons caught the ball and tossed it directly to Choi. Choi, with his foot on first base, caught the ball and got Machado out to conclude the inning.

Choi also caught a foul ball popped in the air by Joey Rickard in the fifth.

Choi’s contribution in fielding culminated in the bottom of the eighth, when he took part in the Angels’ double play to finish off the inning. After James Hardy of the Orioles smacked a grounder to the center with runners on first and second base, Angels second baseman Johnny Giavotella picked up the ball to take out Jonathan Schoop who was trying to run from first base to second. Giavotella then quickly tossed the ball to Choi at the first base to tag out Hardy.

In batting, although Choi failed to make contact with his bat, he got to the base in two occasions with BBs. At the top of second, Choi grabbed four balls and walked to first. He tried to reach second base but was forced out. Lining out in the fourth inning, he walked again in the sixth but his attempt to make a notable play came up short when a double play by the Orioles ended the inning. He struck out swinging during his last at-bat at the top of eighth.

With Choi back in the big league, as well as Ryu Hyun-jin of the Los Angeles Dodgers who returned from rehab and pitched his first majors game Friday, a total of eight Koreans are now in the Major League.

Elsewhere in the majors, Lee Dae-ho of the Seattle Mariners, who played as a designated hitter in Sunday’s 5-3 loss against the Kansas City Royals, was substituted out of the game due to a hand contusion on his right hand.

“He won’t play tomorrow. We need to give him off [days] through the break,” manager Scott Servais said after the game. “The second at-bat, he looked like he was even hesitant to swing.”

Lee is expected to be kept out of games until after the All-Star break due to the injury.

“I think he’ll be fine. ... Just going to need some down time,” said Servais.