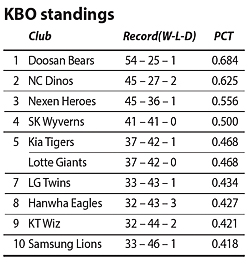 The KBO All-Star Game event, slated for July 15 to 16 at Gocheok Sky Dome, has set its official slogan as “Explore the Best.” At the event, Korea’s baseball fans will be presented with some new experiences.

The All-Star Game event will begin its two-day festival on Friday with an autograph session by players from the Futures League, the second-tier league of the KBO.

After the session, the Futures League All-Star Game will start at 5, followed by events such as “Perfect Pitchers” and Home Run Derby, which is considered the highlight of the All-Star Game.

The “Perfect Pitchers” event will feature 10 players from the top KBO teams, four fielders and six pitchers. The 10 players will toss the ball from the mound to knock down the nine bats that are lined up by the home plate.

In the Home Run Derby, eight batters will take part in the event, four from Dream All-Stars (Doosan Bears, KT Wiz, Lotte Giants, Samsung Lions, and SK Wyverns) and four from Nanum All-Stars (Kia Tigers, Hanwha Eagles, LG Twins, NC Dinos and Nexen Heroes). One player from each of the division will compete at the end for the title of the “Home Run King.”

The first day of the All-Star Game, however, is to reach its peak after the Home Run Derby. Taking advantage of the venue, the KBO will host the “DJ Ground Party.” A DJ will play music out on the ground of the Gocheok Sky Dome, creating a club-like atmosphere where fans can dance under the lights of the domed ballpark.

The second day of the event will kick off with autograph signing session by the KBO top league players such as Na Sung-bum of the NC Dinos, the winner of the All-Star voting this year.

After a taekwondo demonstration by the Korean Army, the official All-Star Game will start at 6 p.m. The two-day event will be concluded with an awards ceremony after the official game. 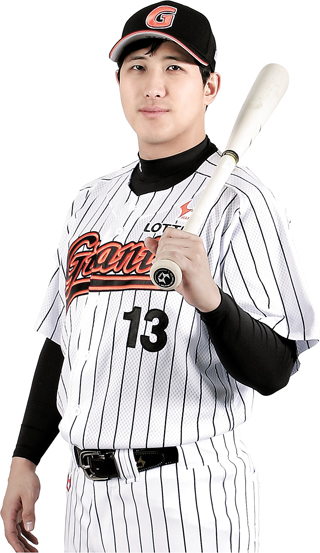 After struggling on the plate, especially in slugging, Hwang Jae-gyun of the Lotte Giants is back to being the cleanup hitter for his team.

Hwang’s numbers were less than impressive at the beginning of the season this year, with his slugging average a meager .472 during the first 50 games. This is a disappointing number considering the previous year around the same time, during which Hwang recorded a slugging average of over .600. Other numbers such as home runs (eight) and batting average (.303) were also alarming, considering he was often the fourth batter for the Giants, a position designated to one of the best hitters of a team.

He needed to change things around but did not know where to start. That’s when the hitting coach of the Giants, Chang Jong-hoon, advised him to go back to his old batting form and be more aggressive on the plate.

Hwang’s batting form underwent a drastic change before the season. He minimized his leg kick motion and started to aim for making consistent contact, rather than long hits. He struck out less early in the season, with his strikeouts averaging .09 compared to the same time last when it averaged .20. But that was the only thing good about the change in his batting form.

It only took him less than a month to be back to his old self.

Hwang credits his coach Chang for the change. “He was a central hitter of the team but he was not aggressive enough,” said Chang. “I told [Hwang] to not be afraid of striking out and just swing the bat.”

“I try not to be too concerned about striking out anymore,” Hwang said. “I don’t put too much meaning to me being the cleanup hitter. I see myself as more of a batter who brings home the previous batters and gives opportunities to those after me.”