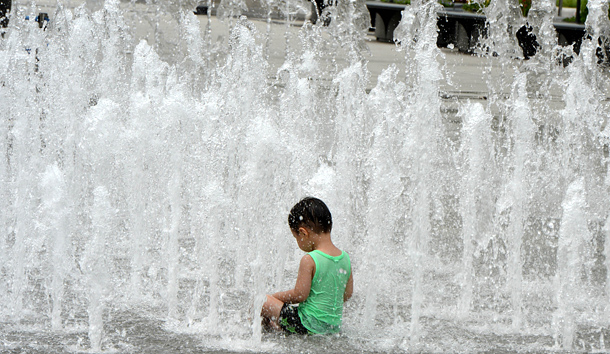 A child frolics in a fountain in Gwanghwamun Square in central Seoul on Monday as a scorching heat wave prevails across the nation. [NEWSIS]

The heat wave that hit Seoul and Gyeonggi on Monday will subside by Tuesday with rainfall throughout the country, according to the Korea Meteorological Administration (KMA).

Health authorities cautioned citizens to take rest and avoid being out in the sun for too long in order to prevent heat-related strokes and illnesses. According to the Korea Centers for Disease Control and Prevention’s records from May 23 to Friday, 213 people got sick from the heat, one of whom died.

The CDC added on Sunday that the number of people with heat sickness has risen exponentially, reaching 74 people in the past week alone.

According to the KMA, the rain that reached Jeju Island and the southern coast of Korea on Monday will hit the central regions of the country, including Seoul, on Tuesday afternoon, and will end by Tuesday night. From Tuesday afternoon to night, the central regions of the country and Seoul will be hit with 5 to 40 millimeters (0.2 to 1.6 inches) of rainfall per hour.