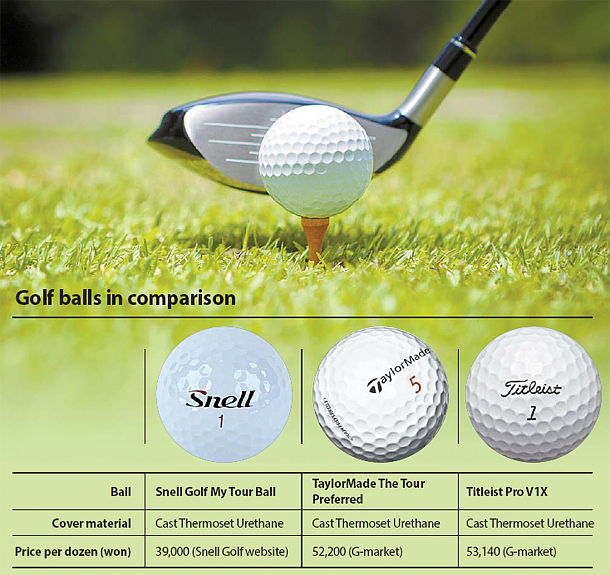 After a century-long absence, golf is finally returning to the Olympics this year in Rio de Janeiro. Without a doubt, this adds more fever to one of the most celebrated sports in the world. The heat for the game does not elude Korea.

As of Tuesday, five Korean female golfers were listed within the top-10 of the Rolex Rankings. Four of them, Park In-bee, Kim Sei-young, Amy Yang and Chun In-gee, have made it into the Korean roster for the Summer Games and as top golfers in the world, their prospect for an Olympic gold is high. As the interest in the sport rises steadily, more Koreans are finding their way to the nearest golf courses and driving ranges to try out the sport themselves.

But, golf is a sport that is often too expensive for some people to play. This makes it difficult for many Koreans to play the game as the pros play and forces them to use cheaper equipment that is often of poorer quality.

Some master craftsmen of sporting gear, including Dean Snell, a golf ball artisan from the United States and the founder of golf ball company Snell Golf, would like to change this. Snell is something of a golf ball savant, working for companies such as Titleist and TaylorMade for more than two decades in research and development. With 38 patents in golf ball technology under his name, Snell began contemplating how to enable regular consumers to enjoy the game of golf while using equipment that is near tour-level. “I try to help grow the game [by reducing] the cost of golf balls,” Snell says. His goal in developing Snell Golf products such as My Tour Ball is to provide tech and performance at affordable prices to help consumers play more, just what Korean amateur golfers might need.

“Snell is uniquely qualified to create Tour-centric models as well as models for average players, and with the launch of his new company, Snell Golf Inc., that’s exactly what he’s doing,” according to a review by Golf magazine.

Some Korean golfers who tried the ball agreed with the review. “There are more expensive balls out there, and these are often the favorites of the pros,” said a KPGA pro. “However, this ball is a superb choice for amateurs who have never used a urethane golf ball before [largely due to its price].”

“Urethane balls are normally expensive and compared to them, I would say Snell Golf products are economical,” added the pro. “Made with cast urethane cover, Snell Golf product [My Tour Ball] creates a higher spin like other tour caliber balls, which increases the level of control in short games or when hitting wedge shots with proper amount of back spins given. I believe this may intrigue the amateur golfers [especially those who are more serious about the sport] and make the game more exciting for them.”

But its urethane cover is not the only thing that makes the ball “tour caliber.” Getting down to brass tacks, the ball’s mantle layer helps amateurs to be able to control the spin during their iron approach, crucial in landing the ball softly on green, instead of having it roll out. Furthermore, the low-compression core of My Tour Ball allows low driver spin, which is critical for amateurs who often rough their tee shots, yet guarantees distance and soft feel.

Mygolfspy.com, a website that provides a detailed analysis on golf equipment and a buyer’s guide, vouches for the KPGA pro’s comment. According to the research done by the website, My Tour Ball of Snell Golf had less spin compared to most of its counterparts when experimented with a driver. Yet, it traveled the furthest among the seven golf balls in comparison. “The My Tour Ball is a phenomenal all-around performer from tee to green,” according to mygolfspy.com.