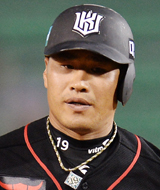 The 36-year-old third baseman was investigated by the police after engaging in the lewd behavior in his car on June 16 in Ilkan, North Jeolla. The woman, who is known to be a 20-year-old, reported Kim to the local police. Although Kim left the scene immediately, police ran the license number of his car and Kim later admitted to the charges. “As long as the victim feels sexually humiliated,” police said, “lewd conduct charges can apply.” Kim was booked without physical detention on July 4.

After the scandal went public, the Wiz decided on Wednesday to release him from the team and place him on the league disqualified list. “We decided to discipline him for damaging the dignity of pro baseball and the club,” said the Wiz in its official statement. “Kim agreed to take the punishment.”

A player who is on the disqualified list cannot return to his club for a year without approval by his team. Although the club still retains ownership over the player, he cannot participate in any team training nor can he receive salary for the duration of his punishment or sign with any other clubs in the league. Kim played for teams such as the Kia Tigers and the Nexen Heroes before joining the Wiz. His career culminated in 2009 when he led the Tigers to the Korean Series with 36 home runs. He won the KBO MVP award and Golden Glove Award for third baseman that year.