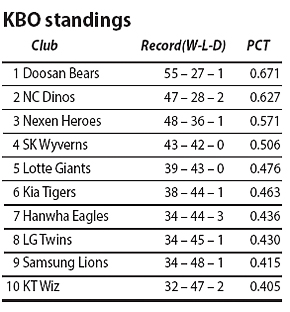 Samsung Lions are surprise strugglers at season’s half

After the All-Star break, the Korea Baseball Organization (KBO) teams are getting ready for the second half of the season. The most surprising result after the first half is the Samsung Lions’ slump.

The Lions have grabbed five regular season championships and four Korean Series titles in the past five years.

Last year, although they reached the Korean Series, they finished as runner-up after the Doosan Bears. Boasting eight Korean Series titles since the team’s start in 1982, shockingly, the Lions finished the first half of this season at ninth in the KBO rankings.

What’s more alarming is how the team got to where it is today. Out of the 10 KBO clubs, the Lions suffered the most reversals, losing 26 games total during the first half, in which it initially had the lead.

The relief pitching lineup, which was once deemed the mightiest of all KBO teams, is nowhere close to the top of the league this year.

At the moment, the Lions relief pitching lineup is at the bottom of the league with a 5.74 earned run average (ERA). Although closer Sim Chang-min maintains a 2.94 ERA, he also struggled and recorded four blown saves in the final 11 games of the first half.

Among all the closers of the 10 clubs, Sim tossed the second-most innings, 45 and 1/3, during the first half. The Lions will have to change this around and allow more room for Sim to breathe in the second half.

Unlike the Lions, the defending champ Bears’ pitching lineup seems to be better than ever.

Bears reliever Jung Jae-hoon has the most holds in the league with 21. Bears pitcher Michael Bowden leads in strikeouts with 97 so far during the first half. 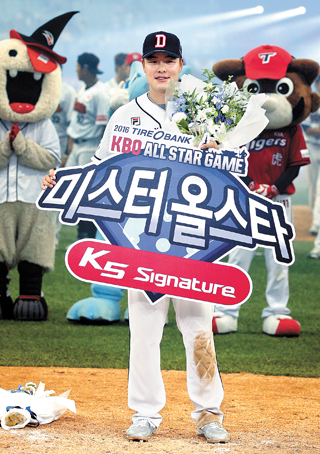 Min Byung-hun of the Doosan Bears was selected as “Mr. All-Star,” the MVP of the All-Star Game on Saturday. Min, who played for the Dream All-Star team during this year’s All-Star Game, received 47 out of 55 votes to win the honor.

Behind the overwhelming victory was his performance during the All-Star Game. He went 3-for-3 with two home runs and also added two runs batted in and three runs scored. He hit a solo homer during his first at-bat in the first inning and added a double in the fourth inning.

He made it to the base again in the fifth inning with a base on ball and had his second and last dinger of the day at the seventh by driving a 133-kilometer-per-hour (82-mile-per hour) fastball by Lee Jae-hak to the left fence. Min’s homer traveled 115 meters in the Gocheok Sky Dome.

Min’s rival of the day was Park Kyung-su of the KT Wiz, who stepped in to the game during the fifth inning as a pinch hitter. During his first at-bat in the fifth inning, Park broke the 3-3 draw by hitting a double. During his second at-bat in the seventh inning, Park hit a homer to go 2-for-2 during the game and extend the Dream team’s lead to 6-3.

Grabbing a clutch hit and a home run that secured the win for the team, Park would have been a rightful candidate for the MVP award. But he could not overcome Min, who had two home runs and a perfect batting record during the day.

Receiving a car as the prize, Min said it was the happiest day of his life. After thanking his parents for the support, he said he would give the car to his mother.

“Instead of setting a goal, I just try to give all I’ve got in each game,” Min said. “I will get some rest for the remainder of the All-Star break before going into the second half of the season.”