Team Korea striker is ready for the spotlight

Team Korea striker is ready for the spotlight 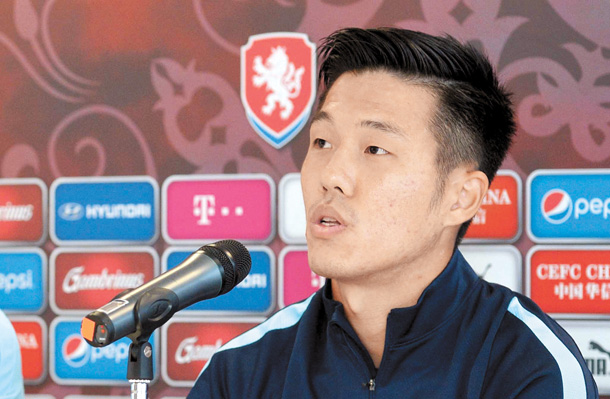 Suk Hyun-jun will play for the Olympic football team this summer as a wild card. His presence will bolster the team’s morale and offense. [NEWSIS]

For Suk Hyun-jun of FC Porto in Portugal’s Primeira Liga, qualifying for Korea’s Olympics football team was as dramatic as any, not least because his spot on the roster came at the 11th hour, just a little over one month before the Rio Games open.

But now, with his place on the team as a wild card secure, the 25-year-old striker has his eyes set on winning gold as he prepares to enter the first major international competition of his career.

“Iceland and Wales, they advanced to the quarterfinals and semifinals of Euro 2016. You never know what is going to happen in football. Our goal is Olympic gold,” Suk said with brimming confidence.

Suk was the last piece of the puzzle for Olympics football team coach Shin Tae-yong, who had been struggling to fill the wild card spots. The Olympics allow each team up to three players over the age of 23 to play in the otherwise under-23 tournament. 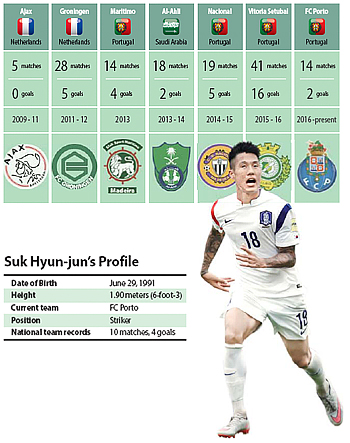 With Son Heung-min of Tottenham Hotspur selected as the first wild card early on in March, the Korean national team had more than enough talent in the offensive midfielder position and flank.

What it lacked was the lone striker physically capable of withstanding his position at the top. Suk, who stands at 1.90 meters (6-foot-3) says he is more than up for the task.

“I am a striker, so of course I want to score in every game I play,” Suk said. “But what’s more important than scoring is helping the team win. I will play for the team and the team only.”

Suk initially did not think he was going to be allowed to join the team. Along with the Hotspur’s Son, Coach Shin’s first picks for the wild card spots were defensive players Jang Hyun-soo of Guangzhou R&F and Hong Jeong-ho, now with Jiangsu Suning.

But after months of waiting, Hong was eventually scratched off the list in early June, when his then-team FC Augsburg declined to make Hong available for the Summer Games.

Time was ticking, and Shin had to make a choice. Then Suk came into the picture.

After scoring a goal and dishing out an assist during the senior team’s friendlies against Spain and the Czech Republic in early June, Suk became the most plausible option for a position on the Olympics squad.

Suk returned to Portugal on June 27, expecting to join FC Porto for off-season training after spending some time in Korea recuperating from the previous season.

But then he got the call from Coach Shin asking him to join Team Korea for the Rio Games.

“As soon as I put the phone down, I yelled, ‘Jackpot!’” Suk recalled. “Honestly, I had given up hope. It felt good to hear the news.”

The ecstatic striker immediately informed his Portuguese club that he would have to go back to Korea to prepare for the Summer Games. Knowing that Suk’s participation on the Olympic team could exempt him from his mandatory military service, the club permitted him to join.

Suk began physical training at the Paju National Football Center in Gyeonggi early this month. Since July 12, he has been training with the second string team of the Suwon Samsung Bluewings.

When asked whether he thinks it was his performance during the friendlies that played a decisive role in the selection, Suk answered, “With the Olympics fast approaching, I thought that was going to be the last chance to prove myself. But it wasn’t like I was so nervous or anything. If I couldn’t go to Rio after I did my best, so be it. Fortunately, I was able to score and play a decent game.”

For Suk, playing in his first major international competition brings more excitement than anxiety. Although perhaps smaller in scale than the World Cup, the striker is well aware of the attention that the team will attract in August.

“It hasn’t hit me yet that I am going to play at the Olympics,” Suk said. “It is an honor that I get a chance to show myself in such a stage. I will be able to show myself to the world.”

Major scouts from big European clubs are on Suk’s mind, another reason why he needs to excel this summer, in order to open the door for a possible transfer to a team with better terms and conditions.

The Korean Olympic team will play Fiji on Aug. 5, Germany on Aug. 8 and Mexico on Aug. 11 during the preliminary stage.

With the goal of replicating the team’s success during the 2012 Olympics, when it won bronze in London, Shin selected the match against Germany as the most important. But Suk is not letting that affect his efforts in other games.

“I will not think that the match against Fiji will be an easy win,” he said. “Each match will be tough.”

While winning gold may seem farfetched, Suk knows there is no set scenario in football.

“As recently as last week, Jeonbuk Hyundai Motors [of the top-tier K-League Classic] lost to Bucheon FC 1995 [of the second-tier K-League Challenge],” he said. “No one knows what is going to happen in football. We also saw Wales going all the way up to the semifinals of Euro 2016.”

Suk has spent his entire senior career overseas, mostly in Europe. As a result, he knows how to go up against physically superior European players.

“They are human, just like us,” Suk said when asked to give an advice to younger players on the team. “They make mistakes. As long as we are prepared mentally we can win. I repeat myself, but our goal is gold.”