Are medals worth their weight?

Are medals worth their weight? 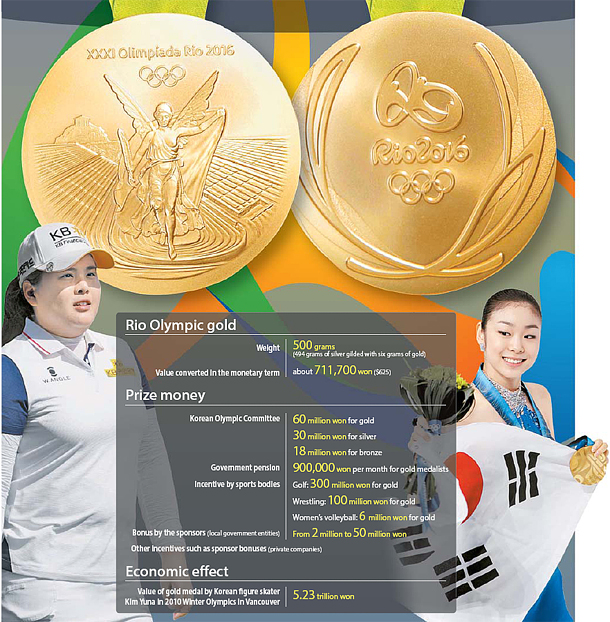 How much financial value does an Olympic gold medal hold?

A gold medal from the Summer Games at Rio de Janeiro is not pure gold but is made of 494 grams of silver, gilded with six grams of gold. Turning this into monetary value considering the prices of gold and silver as of Tuesday, an Olympic gold medal is worth about 711,700 won ($625).

Medals first replaced trophies at the 1904 Games in St. Louis. Back then, gold medals were made of pure gold but the high cost of production made it impractical for them to be produced as such. Twelve years later at the Summer Games in Berlin, victors were rewarded for their feat with medals made of six grams of pure gold and at least 92.5 percent of pure silver, a stipulation of the International Olympic Committee (IOC).

In ancient Greece, a victor from the Olympic Games received 500 drachmas, or Greek silver coins. The value of one drachma was equivalent to the value of a sheep. In the first Olympics in 1896 at Athens, winners of each event received a silver medal instead of gold and were crowned with a laurel wreath.

Athletes around the world today shed blood and tears for an Olympic gold medal worth about 700,000 won. But, there is so much more to a victory in the Olympics than meets the eye, including the glory and joy of accomplishment, not to mention the financial compensation victors receive from their respective Olympic committees.

After each Olympics, the IOC distributes some of its profit earned through commissions from broadcasting rights and partnerships to Olympic committees of the participating nations to pay the medalists.

A Korean athlete who claims a medal from the Games receives prize money from the Korean Olympic Committee (KOC). They also receive bonuses from sponsors and pensions from the Korean government.

Olympians can also expect compensation from related sports associations. The incentive that different sports bodies pay the athletes varies depending on the associations. Some associations set the price early to boost the morale of the athletes while others have yet to come up with detailed plan for the reward.

Among the sports associations in Korea, the Korea Golf Association (KGA) has the highest bonuses for its athletes. The KGA announced in December that it would pay 300 million won to any athlete who wears a gold medal around his or her neck.

In comparison, the Korea Football Association (KFA) has yet to fix the financial rewards for its players. In 2012 for the London Olympics, the KFA set aside 3.1 billion won for the players in case they return home with gold medals. With the squad taking bronze, the team received 1.5 billion won by the KFA.

Although reigning bronze medalists, the team is unclear on how much they could earn if they claim gold from this year’s Games.

Athletes may receive bonuses from their respective sponsors as well. For athletes sponsored by local government entities, bonuses range from 2 million won to 50 million won.

Those who are sponsored by private companies receive more lucrative compensation. Jin Jong-oh, for instance, a Korean sharpshooter who earned two gold medals from 2012 London Games, received 250 million won from his sponsor, KT.

On top of everything, the athletes can expect government pensions when they return home with their necks adorned with medals. Gold medalists can receive 900,000 won for pension or a lump sum of 67.29 million won.

A gold medal also holds intangible value. According to findings by Kwak Seung-jun, an economic professor at the Korea University, from 2007, the economic value of a gold medal was estimated to be about 48 billion won. The value was estimated by aggregating the amount of tax each Korean would be wiling to pay when a Korean athlete wins gold from the Olympics. Taking Consumer Price Index into consideration, a gold medal would hold as much value as 58.4 billion won today.

According to research by the Korea Sports Promotion Foundation, the gold medal that Korean figure skater Kim Yuna clinched in the 2010 Winter Olympics in Vancouver created an economic effect worth as much as 5.23 trillion won.

Depending on how much a gold medal affects people’s emotions, the value it creates can skyrocket.