After delay, Australians will move into Olympic complex

After delay, Australians will move into Olympic complex 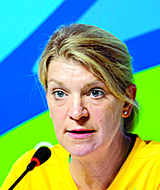 Australia’s delegation head Kitty Chiller says despite a delay of several days, the delegation will move into the athletes’ village this week by Wednesday. [AP/NEWSIS]

RIO DE JANEIRO - Despite a delay of several days, the head of the Australian delegation said she expects her 700 athletes and officials to move into housing at the Rio de Janeiro Olympics on Wednesday.

Australia refused to check in at the athletes’ village when it officially opened on Sunday, complaining about water leaks, gas leaks, electrical faults and filth that delegation head Kitty Chiller said “endangered” athletes.

“It’s looking like, according to our plan, that we will be able to move everybody in on Wednesday,” Chiller said, speaking Monday at Rio’s Olympic Park.

Sidney Levy, the CEO of the Rio organizing committee, told The Associated Press that half of the 31 apartment buildings in the village complex were ready on Monday.

“The rest will be delivered in the next few days,” Levy said, adding that each building might have a few apartments with problems “that might take a bit extra to solve.”

Rio spokesman Mario Andrada said 630 people are “working around the clock” so the village’s 3,600 apartments can be ready on Thursday, barely a week before the Olympics open on Aug. 5.

Many teams are already in Brazil but are attending private training camps and may not need to move into the village for another few days.

Rio Mayor Eduardo Paes, after harshly criticizing Chiller on Sunday, has acknowledged that Australia had the worst prepared building in the vast complex that contains seven swimming pools, tennis courts and a dining area to serve 60,000 meals daily.

“The mayor and I have a date on Wednesday, and I believe there will be a ceremonial handing over of the keys,” Chiller said. “I’ve arranged a little present for the mayor, also. I look forward to meeting him after two years of banter in the media.”

Paes sarcastically said he was tempted to put “a kangaroo jumping outside” the Australians’ building to make them happy.

Chiller stressed her comments had not been an attack on Brazil.

She praised the village on a visit a few months ago, and said so on social media. But that was a dry run.

She said Australia was picking up some extra bills for cleaning services and hotels, but suggested local organizers could get a tab.

“Anyone that we have contracted at this point in time, or any altered arrangements as in extra accommodations at hotels, we are paying for that at the moment,” she said.

“Some of the cleaners we will be paying for, yes. We’ll work out who pays the bill later on.”