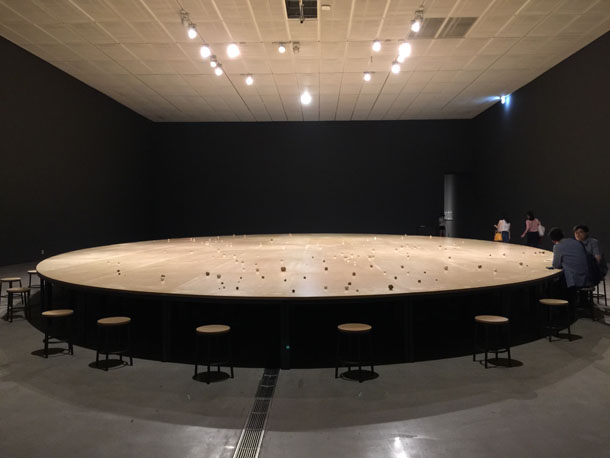 Artist Kimsooja’s new work “Archive of Mind,” above, encourages the audience to make clay balls at a giant oval wooden table while listening to recordings of dried clay balls rolling on the table. The work, which gives an unexpectedly cosmic feel, is part of her solo show that started on Wednesday at the National Museum of Modern and Contemporary Art (MMCA) Seoul. It’s part of “The MMCA Hyundai Motor Series 2016,” the museum’s annual solo show of a leading artist sponsored by the auto giant. [MOON SO-YOUNG]

In a dark room at the National Museum of Modern and Contemporary Art (MMCA) Seoul, there’s a giant, oval-shaped wooden table.

Visitors are encouraged to take lumps of clay from the room’s corner, in four shades ranging from ivory to taupe, roll them into balls and then place them on the table to dry.

As they do so, recordings of dried clay balls rolling on the table are played, and the sound resembles thunder or the movements of some gigantic creature.

The finished balls of clay on the table, set against the black walls, make the room resemble the landscape of a desolate alien planet, lending the whole experience a decidedly cosmic feel. 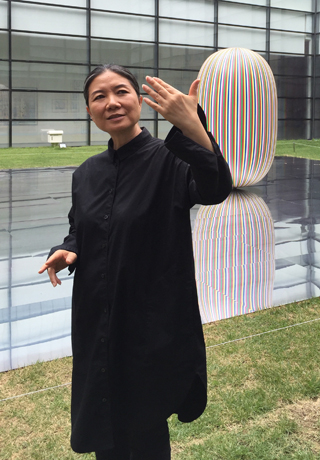 Artist Kimsooja explains a new piece, “Deductive Object,” installed in the courtyard of the MMCA Seoul on Tuesday. [MOON SO-YOUNG]

At the age of 59, Kimsooja is one of the most famous Korean contemporary artists in the international scene. These latest works are part of her solo exhibition that started Wednesday as part of “The MMCA Hyundai Motor Series 2016,” the museum’s annual solo show of a leading artist, sponsored by the auto giant.

Of the nine pieces on display, eight - including “Archive of Mind” and “Unfolding Sphere” - have never been shown before.

“The participants, while rolling clay into a ball, will experience the symmetrical forces of the palms of their both hands,” Kimsooja said at a press preview on Tuesday. “And while making efforts to form a perfect sphere, they will come to also round off the edges of their mind.

“But it is nearly impossible to make a perfect sphere,” she continued. “In addition, when laid for a while to dry, the clay balls come to have an edge on the bottom due to gravity. So the dried clay balls make sounds when they are rolled on the wooden table. The sounds represent their geometric forms - the forms caused by the dual forces [of the participants’ palms] and gravity.”

The artist repeatedly said she has always been interested in dualities including those of light and darkness, inside and outside, material and non-material, and substance and void.

Indeed, linking the boundaries between such dualities using both a purposeful action and a small everyday object like bottari (traditional Korean cloth bundles used to carry belongings) or a needle and thread, have been an important part of her oeuvre.

This is evident in the piece that propelled Kimsooja to fame in 1997, the performance and video “2,727 kilometers Bottari Truck.”

For the work, she traveled throughout Korea for 11 days on a truck loaded with bottari, which she has been using in her art for decades.

Bottari are flat when spread out, but become three-dimensional when bundled up. The transformation requires human action, and the bundles also create a very flexible boundary between the outside world and the contents within.

The exhibition at the MMCA Seoul also includes the fifth and latest piece of Kimsooja’s “Thread Route” short film series.

The series, which the artist describes as a “visual anthropology documentary and visual poem at the same time,” shows how a region’s sewing and weaving culture is related to the residents’ lives and history. It also explores how people’s aesthetics are inspired by the natural world that surrounds them, extending not only to textiles but also architecture and other expressions of culture. The series does this by juxtaposing related images, and this latest piece focuses on North America.

The finale of the exhibition, “Deductive Object,” is a geometric sculpture of a bundled bottari.