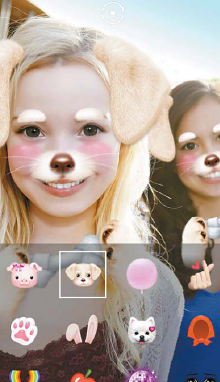 One of the effects of Snow app. [Screen Capture]

Naver is spinning off its massively popular photo- and video-editing app Snow from its subsidiary on Aug. 1 and fostering it as yet another subsidiary, the top portal site and search engine operator said on Wednesday.

The move comes as Naver seeks to ramp up its global foray after it successfully listed Line mobile chat app operator Line Corporation on the New York and Tokyo stock exchanges two weeks ago.

“We have decided to split Snow into an independent entity based on the reasoning that the app, one of the most attention-gathering ones in Asia for video communication, needs an identity that is discerned from Camp Mobile in order to secure sustainable growth in markets it is positively received,” said Naver in a statement. “It is our goal to foster Snow into a service that represents mobile communication culture of 1020 generation in Asia.”

Lee Hae-jin, founder and chairman of Naver, said earlier that the company “prioritizes introducing its services and technologies overseas before domestic market.” Snow, launched in September 2015, lets users add fun to their photo and video and selfies with a collection of more than 100 animated stickers, emoticons and filters. Users - either individuals or a group - may swap their faces and change themselves into dogs or police officers with the help of the app’s facial motion recognition technology.

Outside of Korea, however, Snow carries a dishonorable nickname, Snapchat clone, due to apparent copycat filters with negligible modification. Users point to the dog filter as the foremost example.

In the past 10 months, Snow downloads surpassed 40 million, mostly from Korea, Japan, Taiwan, the Philippines, Vietnam and China. In the Japanese app store, notably, the app recently maintained the top spot for 75 days, an unusual record, and a sizable number of the downloads came from China, where the American chat app Snapchat is blocked.

Naver’s Camp Mobile has been responsible for developing and operating the app but the new subsidiary tentatively named Snow will take over the role. Naver will own a 100 percent in both subsidiaries.

Before being spun off from Naver in March 2013, Camp Mobile was devoted to developing mobile apps and incubating new businesses that could potentially become Naver’s future growth drivers. One of its successful projects include Band, a mobile community app, which has more than 50 million users worldwide.

Snow’s first CEO will be Kim Chang-wook, who formerly headed tourism information provider WingBus, which was acquired by Naver in 2009. He joined Camp Mobile in October 2013 and has been in charge of Snow app within the company.