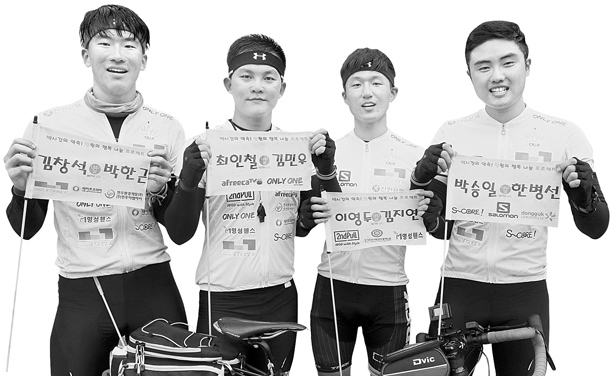 Four men arrived on bicycles to Sungnyemun, central Seoul, at 3 p.m. on July 27. They were covered with cuts and bruises from their 850 kilometer (528.2 mile) ride from Busan to Seoul, which they did to raise money for people with amyotrophic lateral sclerosis (ALS), or Lou Gehrig’s disease.

Their journey was intended to raise funds to build a hospital specializing in Lou Gehrig’s disease. The participants consisted of Kim Min-woo, a 27-year-old athletics major at Dongguk University, and Han Byung-seon, a 26-year-old in the same department as Kim. Park Han-geun, a 20-year-old physical education major at Dongguk, and Kim Ji-yeon, a 20-year-old attending Mokpo National Maritime University, also took part.

Han said a famous basketball player with ALS motivated him to take part in the project.

“I wanted to become a soccer player but that dream was crushed because of my health and a series of surgeries,” Han said. “But I was able to regain my strength when I heard the story of Park Seung-il battling Lou Gehrig’s disease.”

He went on to say, “I wanted to cheer people up just as Park had done for me, so I gathered friends to challenge.”

The journey, done in over 30 degree Celsius (86 Fahrenheit) heat, was no easy task.

“The aftereffects of surgery made it hard to keep riding because my muscular strength was low,” Han said.

But the participants tried to recall the patients whenever they faced hardship. Each one brought a flag inscribed with the names of Lou Gehrig’s disease sufferers.

“The only dream of those with Lou Gehrig’s disease is just to move as they want,” said the 26-year-old Kim. “We just want to ride on behalf of them.”

He added that the basketball player also sent them a message to cheer them up.

The riders came up with different ways to raise as much money as possible. They persuaded people around them, used social network services and crowdfunded. They were ultimately able to raise 1.3 million won ($1,160)

While they traveled, they aired a live broadcast via Afreeca TV to promote their activity. The total amount raised so far now exceeds 11 million won.

The four will raise funds until September and will deliver the proceeds to the Seungil Hope Foundation, a charity created by the basketball player.

He added, “We want to get the message across that common people just like us can help those in need.”