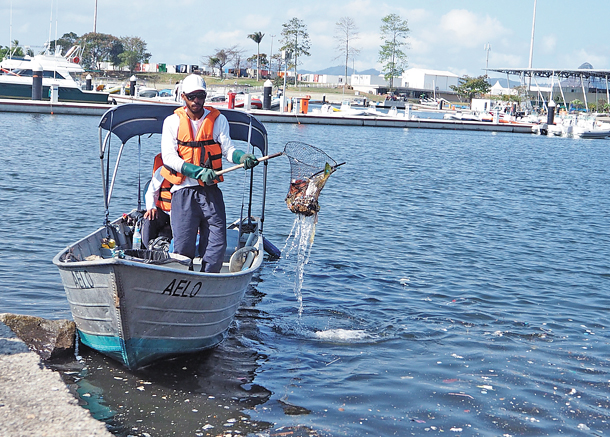 A worker scoops up a pile of trash near a dock at Guanabara Bay in Rio de Janeiro. The pollution at the venue puts athletes at a great health risk but remedial initiatives by the local authority have been rather sluggish and unproductive. [JOONGANG PHOTO]

Is Rio de Janeiro ready for the Olympics set to begin in only five days?

At the moment, the venue for the 2016 Olympics is embroiled with myriad controversies and concerns such as political turmoil, questions regarding its preparedness and public safety, to name a few. In addition, the New York Times last week raised an environmental concern, particularly about the waters where athletes will compete in events such as sailing and marathon swimming. While numerous problems mire the first Summer Games in Latin America since 1968, the issues surrounding the contaminated Guanabara Bay affect Korea as well, which has athletes participating in open-water events such as sailing, rowing and canoeing.

It’s been a while since the Brazilian government has been confronted for its failure to tackle the pollution issue. According to ongoing research, the bay is filled with bacteria and viruses, including the drug-resistant “super bacteria” normally found in hospitals, which is difficult to treat. Although Brazilian officials have tried to amend the problem, progress has been sluggish and most efforts by the government have been criticized as temporary measures. The government has tried stopgap measures like collecting trash near the bay. What is disconcerting is that with such limitations, it’s impossible to get to the bottom of the problem and eradicate the issue of human and factory waste flowing from nearby towns and plants, experts say.

“Foreign athletes will literally be swimming in human crap, and they risk getting sick from all those microorganisms,” Dr. Daniel Becker, a local pediatrician, told the New York Times. 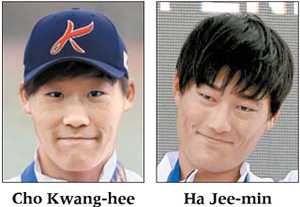 In rowing, Kim Dong-yong will compete in men’s single sculls, while Kim Ye-ji will take part in women’s single sculls. Both qualified for the Olympics during the 2016 Asia & Oceania Continental Qualification Regatta in Chungju, Korea. In canoeing, Cho Kwang-hee and Choi Min-kyu will be participating in the men’s K-2 200-meter sprint.

For Korean Olympians, participating in the Rio Games means not just competing at their peak level but trying to prevent bacteria or germs from entering their body so they can bring home a medal instead of a disease.

“About a year ago, the color of the waters [at Guanabara Bay] was only black and dark blue,” said Jin Hong-chul, coach for the Korean sailing team, who surveyed the venue. “The condition has improved a bit now that the Games are just around the corner. They must have put all the manpower they have here. But when the wind blows from where the factories are, I can still smell the stench.”

Jordi Xammar of Spain, a sailor, says he feels dizzy after training and the contamination complicates matters since it creates so many other things to worry about other than just figuring out the tactics for the competition.

Many athletes concurred, saying they can see floating garbage, not to mention noticing a terrible smell every time they train in the water. On days conditions have improved, they speculate that Brazilian authorities may have used excessive chemicals to try to handle the issue hastily.

Some countries are taking innovative measures in response. Singapore is providing its athletes with body cleanser with antibacterial contents, while the U.S. rowing team will be wearing suits made of antibacterial materials.

For Koreans traveling to Rio as spectators, the Ministry of Foreign Affairs has advised that they refrain from swimming in Rio’s waters to prevent parasitic and other water-borne infectious diseases, according to its official travelers’ guide.