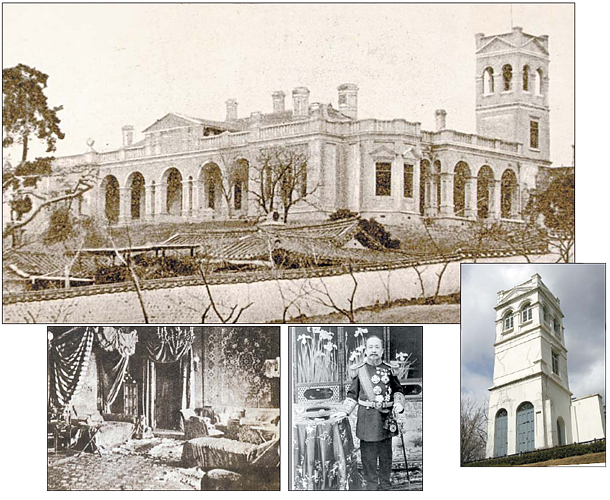 Clockwise from top left: The Russian Legation building, where King Gojong (1852-1919) fled in 1896, shows its former glory in this late 19th century photo; Today, only an ivory tower remains; King Gojong has been largely remembered as an incompetent ruler, but there have been attempts to reevaluate his leadership in recent years; This photo is thought to show the room where King Gojong stayed while taking shelter in the Russian legation. It was here that he planned for a modern, independent Korean state to succeed the Joseon Dynasty (1392-1910). [JOONGANG ILBO]

Anniversaries are typically celebratory, but this year features an exception.

It marks the 120th anniversary of the flight of King Gojong (1852-1919) to the Russian legation amid increasing threats from the Japanese.

The event is considered shameful by many Koreans, and Gojong himself, who was the last ruler of the Joseon Dynasty (1392-1910), is often remembered as an incompetent ruler who watched as Joseon fell and Japanese colonization began on his watch.

But in line with recent attempts to reevaluate Gojong, the Cultural Heritage Administration (CHA) announced recently that they will reconstruct part of the so-called King’s Road, or the path Gojong walked to refuge, as well as the Russian legation building itself. 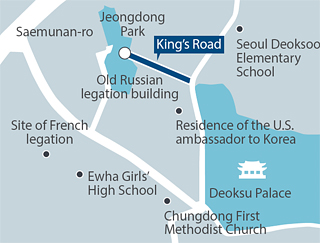 According to the CHA, a map of the Jeongdong area, created by the U.S. legation during the short-lived Daehan Empire period (1897-1910), shows the “King’s Road” between the Habib House, or the old residence of the U.S. Ambassador to Korea, and Seonwonjeon, the structure that once kept royal portraits.

King’s Road is currently within the Habib House complex and has therefore been off-limits to the public. After the CHA’s reconstruction, however, it will be accessible to all.

“[The reconstruction] will begin in September and end late next year,” the CHA said in a press release on July 20. About 2.5 billion won ($2.2 million) has been allocated for the project.

The CHA will also reconstruct Seonwonjeon, which consisted of several structures and was originally situated inside the palace grounds. (Korean palaces today are usually much smaller than their original sizes, as the Japanese colonial government downsized them in an attempt to undermine royal authority.) In 2003, an archaeological excavation found that the original site of Seonwonjeon was actually on U.S. property. The Korean government managed to regain the ownership of the plot in 2011, in exchange for a plot within Yongsan Garrison located in the Yongsan District. It was this deal that made the recreation of Seonwonjeon possible.

Gojong constructed Seonwonjeon before the establishment of the Korean Empire. Also known as the Daehan Empire, the period refers to the final years of the Joseon Dynasty during which the state transformed into an empire in an attempt to stave off increasing Japanese encroachment.

Seonwonjeon burned down in 1900, and while it was reconstructed in the current site shortly afterwards, the Japanese demolished it a year after Gojong died.

Along with the announcement of the reconstruction of the King’s Road and Seonwonjeon, the CHA also said it will restore the Russian Legation building where King Gojong stayed for a year.

Set on high ground overlooking the city, the legation complex was constructed in 1895 by Russian architect Afanasij Ivanovich Seredin Sabatin. Historians say it was one of the most conspicuous buildings in the city.

The castle-like, Renaissance-style building, however, was mostly destroyed in the Korean War (1950-53), with only a three-story tower remaining today. It wasn’t until the 1970s that the Korean government designated the structure as a cultural property (Historic Site No. 253) and had it repaired.

The restoration will begin next year and finish in 2021, the CHA said.

Gojong’s fleeing to the Russian legation “is what led to the declaration of the Daehan Empire,” said Kim Mun-sik, history professor of Dankook University says. “Although Japanese colonization began not long after, we still must appreciate Gojong’s diplomatic attempts to keep Joseon an independent state.”

It was in the Russian legation that Gojong replaced the pro-Japanese government with a pro-Russian government; dispatched envoys to Western powers; and planned for a modern, independent Korean state.

“Present-day Korea succeeds the Daehan Empire, which was a modern state,” said historian Lee Tae-jin, an emeritus professor at Seoul National University and former president of the National Institute of Korean History. “Although it’s belated, the restoration of the heritage sites in the Jeongdong area relevant to the modern history of Korea is very meaningful.”