Hwang Hee-chan is ready to hit the field in Rio

Hwang Hee-chan is ready to hit the field in Rio 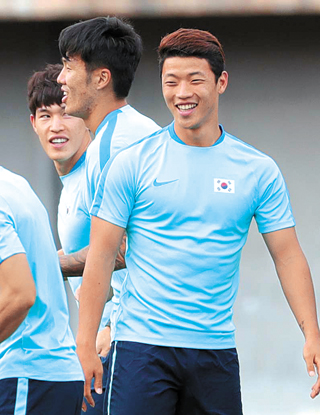 Hwang Hee-chan of the Red Bull Salzburg is a name Korean fans may remember after the Summer Games at Rio de Janeiro.

Based on the Chinese characters that make up Hee-chan, Hwang’s first name means “happy” and “brilliant,” and he has definitely lived up to his name in preparation for the Games.

The latest hint that Hwang may become a star to remember after the Olympics came during the final tune-up match against Sweden last week. Hwang played almost the entire match as the lone striker, even tallying an assist in the 54th minute for his teammate Ryu Seung-woo. Hwang led the team’s offense throughout the match until he was replaced by Suk Hyun-jun of FC Porto, a wild card striker, in the 88th minute of the game.

Despite his age, the 20-year-old forward, who is the youngest member of the team, has always been someone that Shin Tae-yong, Hwang’s manager, could count on.

“I like Wayne Rooney and his style of play,” said Hwang during the 2016 AFC U-23 Championship. “His bold plays in the offense as well as his contribution in the defense, even though he is a striker, I like that and I want to deliver that sort of performance when I am out there.”

Hwang lived up to this by assisting a goal after shaking off three defenders during the semi-finals match against Qatar, helping the team to secure the ticket to the Rio Olympics.

Hwang is also a living embodiment of the quote by Thomas Edison, “Genius is one percent inspiration and ninety-nine percent perspiration.”

Like his idol Rooney, he is often found during games contributing to the team’s defensive effort and challenging opponents’ midfielders for the ball. This requires Hwang to run more than an average striker, who typically spends the majority of a game on the offensive side of things.

“Hwang learned the importance of strikers supporting defense and how that affects the games,” said his agent. “While he was on leave, he went and visited Jeon Kwon, who is known to be one of the most renowned figures in the world when it comes to freestyle football, and learned dribbling and other skills.” His sweat and tears have born fruit, as evident by the fact that Hwang made in into the Olympics squad in which players who are three years or older than him take up the key assignments.

From Hwang’s perspective, being on a team with older players is a great learning opportunity.

When asked about his chemistry with offensive midfielders such as Son Heung-min, Moon Chang-jin and Kwon Chang-hoon, Hwang answered, “When I move to the side, I bring along a defender from the opposing team. This gives others more room to move around. We often talk about this kind of stuff while taking a break and we try to improve our team plays.”

He is assigned to share a room with Son and hopes to exploit the chance to learn from the best. “I talked to Son about the game against Sweden and his advice was to move more systematically with others,” said Hwang. “He told me we can play our game if we can narrow the space and force the opponents to play the pace we set up.”

The first match against Fiji tomorrow will be Hwang’s first appearance in the major international competition and he is more than determined to show the world what he is made of. “As a striker, I want to score whenever given the chance,” said Hwang.