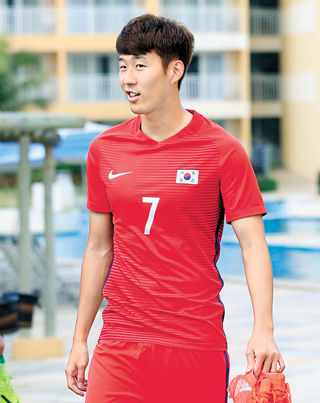 Son Heung-min of Tottenham Hotspur joined team training on Tuesday in Salvador, Brazil, the first time that the entire Olympic football squad was gathered together.

With only a day to go before the first preliminary stage match against Fiji in Salvador, the presence of Son in the pitch, a key player for an elite English Premier League (EPL) club, is enough to boost the team’s chance at a medal as well as its morale.

Although Son initially was expected to be held out of the team’s first game against Fiji, the latest remarks suggest he may play in the match against the South Pacific island country.

After the team practice on Tuesday at the Estadio Manoel Barradas stadium in Salvador, Son mentioned the possibility of playing against Fiji, a team that Korea should have no problem breezing past with a win, and said, “I would like to be able to contribute to the team’s success. When [manager] Shin Tae-yong asked me earlier whether I could play in the second half of the match against Fiji, I told him that I welcome any opportunity to play for the team.”

Son just came out of a pre-season schedule with his EPL team and flew over 36 hours to get to Brazil. It is without question that Son is physically drained and needs some time to recuperate.

But Son begs to differ and has repeatedly appealed to Shin, saying that he is ready to go.

“Physically, I am in good condition,” said Son. “I had opportunities to work on my conditioning during the pre-season. I discuss my condition with the manager frequently. Nothing has been decided yet so things might change, after all.”

When asked about how he manages to jet-lag, Son answered, “The best solution for me is to stay awake as late as possible. I feel the adrenaline after the practice and this helps me to stay awake. My sleep schedule is all messed up going from England to Australia and now to here, but this is something that I should be able to overcome.”

Son’s presence is also expected to boost the work ethic of the younger players on the team, particularly those who will compete for starting positions at his side in the offense. As a wild card and indisputable ace of the team, Son will play as a starting offensive midfielder. This means two players among Ryu Seong-woo, Kwon Chang-hoon and Moon Chang-jin will have to fight for the positions at Son’s left and right flanks.

Among these three, it looks like Moon will comfortably secure his starting position on the right side. Not only did Moon pile in two goals during the tune-up match against Sweden last week, but Moon has scored more goals under Shin’s watch than any other player on the team, netting 14 goals in the 26 games Moon has played since the skipper assumed leadership position.

Kwon also may well play as the starting midfielder along with Son and Moon. Although he injured his Achilles tendon during a K-League Classic match in May, Shin never neglected his trust in Kwon. He scored seven goals in 14 games he played under Shin, earning himself a reputation as a middle-striker. His meticulous passing and powerful shots are his forte.

But whoever stands at his side, Son will play his game as the upstart of the Olympics. Son has recently been selected by FIFA as one of the football stars to watch this summer, along with Neymar da Silva Santos Junior, more popularly known simply as Neymar, of Brazil. For the skipper Shin and his squad, having such a player at the frontline means they have someone they can count on in a pinch. As for opponents, it adds that much more pressure and intimidation to the gameplay.

As the reigning bronze medalist from the previous Summer Games, manager Shin and the rest of the squad hopes to match and even surpass the performance by the 2012 team.